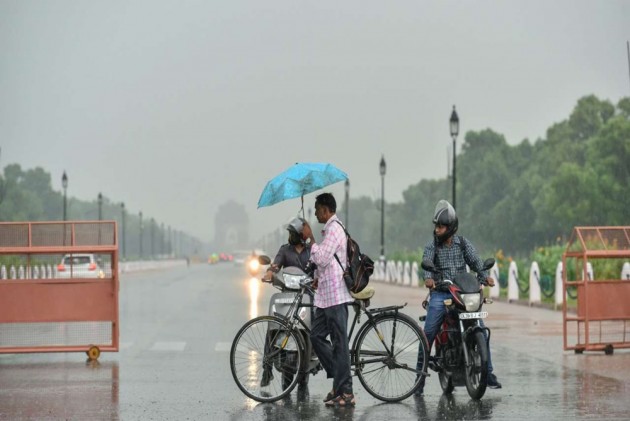 Residents in parts of Delhi woke up to the sound of hailstones hitting rooftops and windows, even as sporadic rain continued in the national capital for the fourth consecutive day on Wednesday.

More rain and hailstorms are predicted during the day, it said.

Residents in neighbouring Gurgaon shared video clips of hailstorm there.

On Tuesday, the Safdarjung Observatory, which provides representative data for Delhi, recorded 1.3 mm rainfall till 5:30 pm.

The weather stations at Palam, Lodhi Road and Ridge recorded 5.3 mm, 0.4 mm and 4.8 mm rainfall, respectively, during the period.

Clouds trap some of the outgoing infrared radiation and radiate it back downwards, warming the ground.

The rains, under the influence of a strong western disturbance, come on the back of a "severe" cold wave that gripped Delhi in the run-up to the New Year.

On Friday, the mercury plummeted to 1.1 degrees Celsius, the lowest in 15 years for January, and very dense fog lowered visibility to "zero" metres.

On Sunday, there was intense rainfall, thunder and lightning in the city. The Safdarjung Observatory recorded 39.9 mm rainfall between 8:30 am on Saturday and 2:30 pm on Sunday.

The western disturbance is causing widespread snowfall in the hills too. Once it withdraws, the mercury will fall again to 4 to 5 degrees Celsius, officials said.