According to IMD, the capital Delhi is likely to witness cloudy sky with moderate rainfall on Thursday. 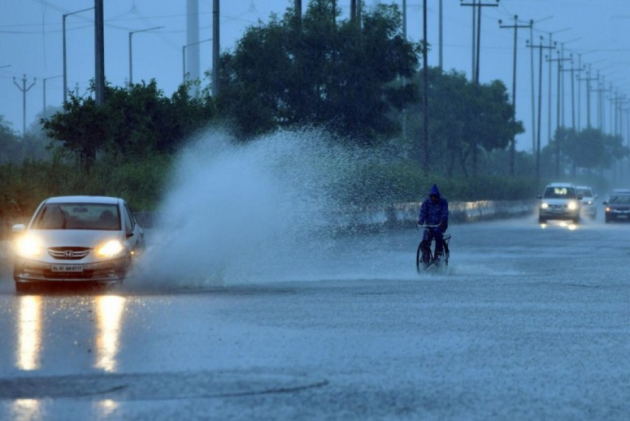 The rains lashed parts of Delhi on Thursday, even as Indian Meteorological Department(IMD) has predicted strong winds will sweep the national capital during the day.

According to the weathermen, 1.8 mm rainfall was recorded in the last 24 hours in Delhi.

“The city will witness generally cloudy sky with moderate rain and thundershowers. Strong surface winds of 20-30 kmph are expected to sweep through the region during the day,” said an IMD official.

The national capital recorded a minimum temperature of 24.8 degrees Celsius.

The maximum temperature is likely to settle around 32 degrees Celsius, a MeT forecast said.

Relative humidity at 8.30 am on Thursday was 98 per cent, weather office said.

According to the Met office, Wednesday's maximum temperature was 35.3 degrees Celsius, one notch above the season's average.

The capital has already recorded 1,146.4 mm of rainfall so far this monsoon season, the highest in 46 years and almost double the precipitation gauged last year.

The Safdarjung observatory, which is considered the official marker for the city, had gauged 1,150 mm of rainfall in the monsoon season in 1975.

The monsoon has dumped 390 mm of rainfall in Delhi this month till Tuesday, the highest in September in 77 years.(With PTI inputs)