Earlier in the day, Thackeray met Chief Election Commissioner Sunil Arora and demanded the Assembly polls in the state, due later this year, be conducted through paper ballots instead of EVMs. 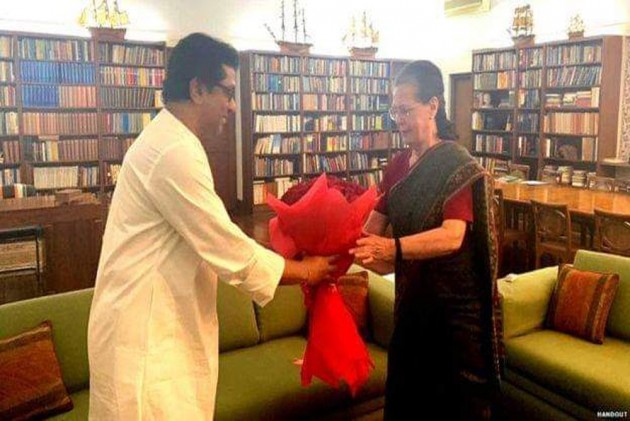 Maharashtra Navnirman Sena (MNS) chief Raj Thackeray on Monday met UPA chairperson Sonia Gandhi and discussed the issue of EVMs and politics of Maharashtra where assembly elections are scheduled for later this year.

Thackeray met Gandhi at her residence at 10 Janpath, according to PTI.

The two leaders mainly discussed the EVM issue, but they also exchanged views on the political situation in the state in view of the upcoming assembly polls in the state, sources said.

Earlier in the day, Thackeray met Chief Election Commissioner Sunil Arora and demanded the Assembly polls in the state, due later this year, be conducted through paper ballots instead of EVMs.

In his visit to the national capital, the first in more than a decade, Thackeray said he has submitted a letter to the Election Commission, demanding it to switch back to the traditional paper ballot. He termed the meeting "mere formality".

"There are doubts in the minds of voters that the votes they cast do not go to their chosen candidates. In such a scenario, the Election Commission should switch back to paper ballots and conduct the Maharashtra state polls through it. We strongly feel that the EVMs can be tampered with," Thackeray told reporters after the meeting.

Thackeray also cited media reports which stated that there was a difference in the tally between the votes cast and votes counted in nearly 220 Lok Sabha constituencies.