Rajapaksa Extends A Hand Of Friendship Towards India

Rajapaksa’s office released a voice recording of the remarks he made during the summit with Prime Minister Modi. 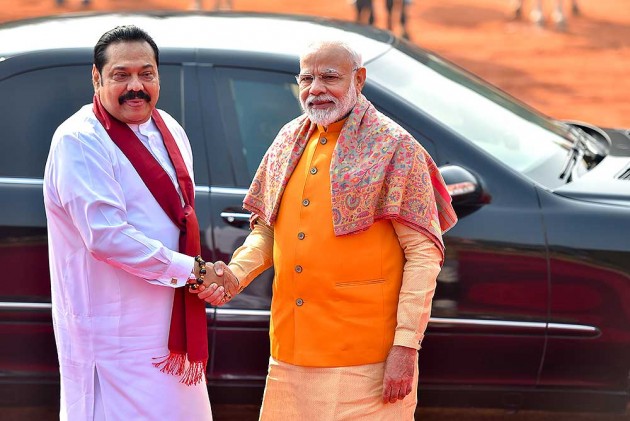 Sri Lankan Prime Minister Mahinda Rajapaksa on Saturday praised his Indian counterpart Narendra Modi for extending help and cooperation to his country in several areas, including in combatting the COVID-19 pandemic, as the two leaders held a "very successful" virtual summit and agreed to boost the "robust" bilateral ties.

Rajapaksa’s office released a voice recording of the remarks he made during the summit with Prime Minister Modi.

"I must thank your Honour for the invitation extended to attend this summit. This is my first meeting with you since I became the Prime Minister," Rajapaksa said.

"Even though we are not meeting face to face our historical friendship would continue to grow", he said, adding that as the leader of the SAARC, India has taken the lead in fostering regional cooperation.

"Prime Minister @narendramodi and I held a very successful Virtual Summit today to exchange views on the #SriLanka – #India bilateral cooperation. We both agreed to continue the two-way dialogue to further advance the centuries-old, robust relationship between our two countries," Rajapaksa said in a tweet.

Prime Minister @narendramodi and I held a very successful Virtual Summit today to exchange views on the #SriLanka – #India bilateral cooperation. We both agreed to continue the two-way dialogue to further advance the centuries-old, robust relationship between our two countries. pic.twitter.com/9FNV2IbIj7

The Sri Lankan prime minister told his Indian counterpart that his party had received a large electoral mandate at two successive elections.

"We are happy with the large mandate we received and I wish to assure you that we will make use of the mandate and create conditions for all communities to live in coexistence," he said.

On regional security, he told Modi that Sri Lanka was aware of India's ready cooperation and understanding of issues concerning security and international borders."You are supportive of our efforts to find solutions to these issues while emphasizing the need to work in close cooperation,” he said.

Rajapaksa recalled that India had assisted Sri Lanka in combating COVID-19 as the island nation had received praise from the WHO for curbing the pandemic.

Rajapaksa said the economies of both countries were presented with opportunities in the post-COVID-19 phase as Sri Lanka was bent on concentrating on an economy based on local production.

He recalled the joint Indo-Lanka effort in handling the oil tanker fire off Sri Lanka’s east coast and said he was thankful to India for its assistance.

The summit was the result of Modi’s initiative during his telephone conversation with Rajapaksa after the ruling SLPP recorded a landslide win in the August parliamentary election.