Congress chief spokesperson Randeep Surjewala said, 'The political crisis in Rajasthan Congress stands resolved amicably by the intervention of none other than Rahul Gandhi himself.' 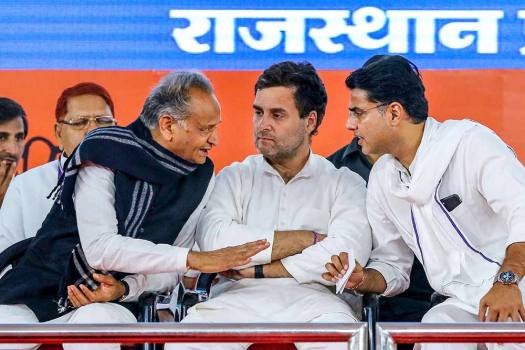 Several Congress leaders "welcomed back" Sachin Pilot on Tuesday after the former Rajasthan deputy chief minister's meeting with Rahul Gandhi that signalled an "amicable resolution" of nearly a month-long political crisis in the state.

Soon after his patch-up talks with senior Congress leaders, Pilot on Monday night said he has never hankered after posts and his was a fight for principles.

"Welcome back Sachin. A constructive and enjoyable phase of Rajasthan building awaits," senior Congress leader Abhishek Singhvi tweeted after the party issued a statement saying Sonia Gandhi has decided that the AICC will constitute a three-member committee to "address the issues raised by Pilot and the aggrieved MLAs and arrive at an appropriate resolution thereof".

Singhvi also congratulated Rahul Gandhi and his tireless team, including K C Venugopal, Randeep Surjewala and Ajay Maken, and added "not to forget political instincts of (Ashok) Gehlot which rarely fail him".

Congress chief spokesperson Randeep Surjewala said, "The political crisis in Rajasthan Congress stands resolved amicably by the intervention of none other than Rahul Gandhi himself."

Also Read: 'My Fight Is Of Principles, Never Craved For Any Post': Sachin Pilot After Meeting Congress Leaders

"This is reflective of steadfast unity in Congress party and the commitment of Congress legislators to never fall prey to BJP's evil designs to defeat democracy," he told PTI.

Senior Congress leader Digvijaya Singh said he was very happy that finally the efforts of Rahul Gandhi and Priyanka Gandhi "resolved the dispute of Rajasthan Congress".

"Now everyone should fulfill the promises made to the people of Rajasthan," he said.

Senior Congress leader Shashi Tharoor said the path of reconciliation is the best for Pilot and "for all of us".

Hailing Rahul and Priyanka Gandhi for their efforts, Congress leader Jitin Prasada said, "We have managed to keep one of our own, Sachin Pilot, with us."

"This is the democratic spirit of our party @INCIndia where there is room for dissent and debate," said Prasada, who is considered a leader of the party's young brigade.

Congress spokesperson and another young leader Jaiveer Shergill said at the end of the day, all is well for the Congress and "all in the well for BJP".

Reacting to the development, Haryana Congress leader Kuldeep Bishnoi said he was extremely heartened to hear the news.

"India needs good people with good hearts and good intentions in government. Let’s do our bit," he said on Twitter, adding, “We are stronger together."

"Sachin Pilot bhai had made it very clear from Day 1 that he was never joining BJP," he said.

After his meeting with Rahul Gandhi and Priyanka Gandhi, the party said Pilot will "work in the interest" of the Congress and its government in Rajasthan.

The meeting between Rahul Gandhi and Pilot at the former party chief's residence, where Priyanka Gandhi Vadra was also present, lasted two hours during which they had a "frank, open and conclusive" discussion, the party said.