Amid the rising crisis posed by Chief Minister Ashok Gehlot's sulking deputy Sachin Pilot who declared that the Congress government is in a minority, 107 MLAs have been shifted to a hotel. 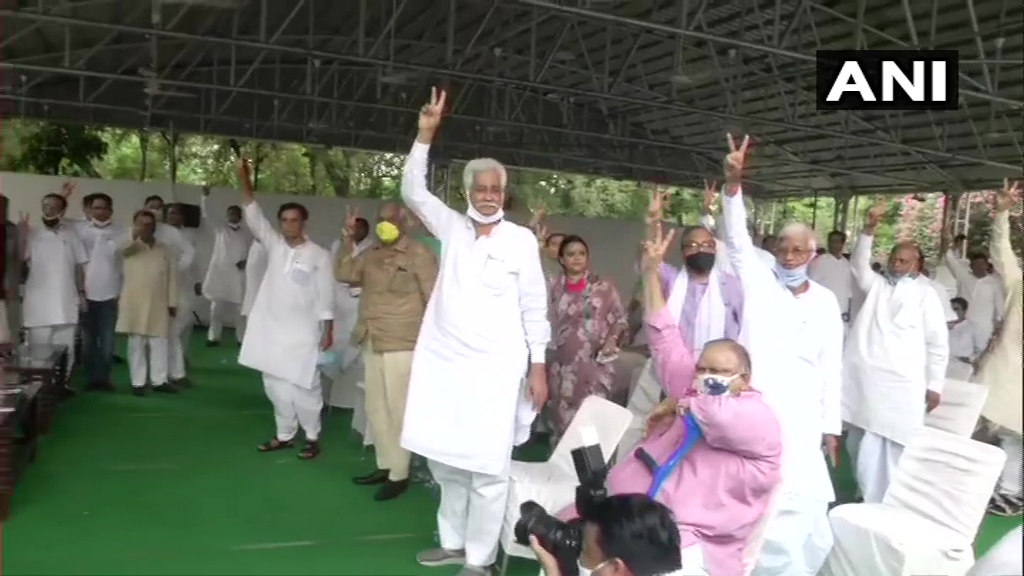 Soon after the culmination of the CLP meeting at the Chief Minister's residence in Jaipur on Monday, Rajasthan Congress MLAs were sent to the Fairmont Hotel on the Delhi-Jaipur highway after the party passed a resolution raising a demand to punish "anti-party elements".

Fairmont is the same hotel which was raided by I-T sleuths on Monday morning.

Rajasthan Crisis: Notice Sent By Police Had Upset Sachin Pilot, Made Him Head To Delhi

Sachin Pilot Says Won't Join BJP But Was He Ready To Defect?

Four buses were parked outside the Chief Minister's residence which took the MLAs to the hotel as part of the resort politics to keep the Gehlot camp's flock safe amid the rising crisis posed by Chief Minister Ashok Gehlot's sulking deputy Sachin Pilot who declared on Sunday that the Gehlot government is in a minority.

However, brushing aside Pilot's claims, Gehlot showed majority numbers and flashed a victory symbol as over 100 MLAs stood with him.

The party also passed resolution against the BJP on Monday after the CLP meeting and said that it strongly condemns "attempts to kill democracy".

It said that people behind anti-party acts should be punished as it criticised any kind of "undemocratic act" which maligns the party' image.

Earlier, a whip was issued for all MLAs to attend the meeting, however, Pilot and his flock of 18 MLAs were missing from the meeting.

Meanwhile, striking a conciliatory note at a press conference, Randeep Surjewala said the MLAs who have not yet turned up in Jaipur can call Avinash Pande, the AICC general secretary in-charge of Rajasthan.

He said the party’s top leadership spoke to Pilot several times in the last 72 hours.

Surjewala said differences in a family can be resolved within the family, suggesting that Pilot and other MLAs should come and discuss grievances at party forums.

The Congress had rushed Pande, Surjewala and Ajay Maken to Jaipur as observers at the meeting, amid a power tussle between its two Rajasthan leaders.

Congress leader Rahul Gandhi has spoken to both CM Ashok Gehlot and Sachin Pilot over phone to take stock of the developments in Rajasthan. Rahul and his sister Priyanka Gandhi Vadra are likely to speak to Gehlot and Pilot again in a bid to resolve the crisis. Gehlot has assured the central leadership of stability of his government, with or without support of Pilot and his loyalists.