Even after Ashok Gehlot-led Congress camp invited deputy CM Sachin Pilot to attend the second Congress Legislature Party meet on Tuesday, the rebel leader did not show up, further deepening the political crisis in Rajasthan. 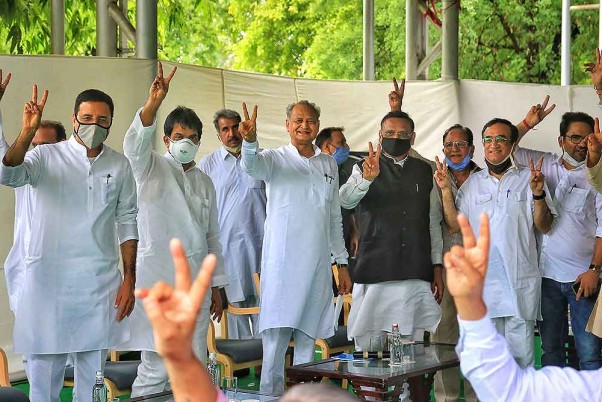 Rajasthan Deputy Chief Minister Sachin Pilot has skipped the second Congress Legislature Party meeting even after the senior party leader Randeep Surjewala invited him to “come and resolve the issues” that have erupted after the conflict between him and Chief Minister Ashok Gehlot escalated.

The meeting is being held at a hotel on the Delhi highway where the Congress MLAs are currently lodged amid rising speculation over Pilot joining the BJP or floating a new party.

Notice Sent By Police Had Upset Sachin Pilot, Made Him Head To Delhi

Congress MLA, Master Bhawarlal, who is in hospital, has pledged support to Gehlot, sources said.

Congress MLA Danish Abrar, known to be a confidante of Pilot, is also at the CLP. Abrar said the Gehlot-led government will survive. He added that Pilot has not officially said anything against the party and blamed the BJP for trying it's “usual tricks to destabilise the government”. He said the BJP will not succeed in its endeavours.

As per the attendance at the CLP, Congress' numbers stand at 102, a seat more than the simple majority mark. The Gehlot camp, however, claims that another 8-9 MLAs from Pilot's camp have been in their touch and assured support.

Tuesday’s meeting was said to be a second chance for Pilot, who is also the president of the state unit of the party.

"The CLP meeting will be held on Tuesday. We request Sachin Pilot and all other MLAs to come. We will also give them in writing to come and discuss the issues," Surjewala had said.

Ahead of Congress’ second CLP meeting, Pilot, in a show of strength, released a video showing at least 16 Congress MLAs of his camp sitting together.

The 10-second video was shared late at night on Pilot's official WhatsApp group.

The leaders also said that Pilot was asked to attend the Congress Legislature Party meeting in Jaipur on Monday, but he did not attend the meet, even though it was delayed by a few hours to enable him to join.

A resolution adopted at the CLP meeting on Monday urged "strong disciplinary action" against any party office-bearer or CLP member who does anything to weaken the government or the party, but stopped short of naming Pilot, who is the deputy chief minister and also heads the state unit of the party.

Pilot, who is in Delhi, has raised a banner of revolt against Gehlot, after the special operations group (SOG) of Rajasthan Police sent a notice to him for appearing before it in the case involving "horse-trading" of MLAs in the state.

The SOG has registered an FIR in the case and has sent notices to the chief minister, Pilot, chief whip of Congress and some ministers and MLAs.