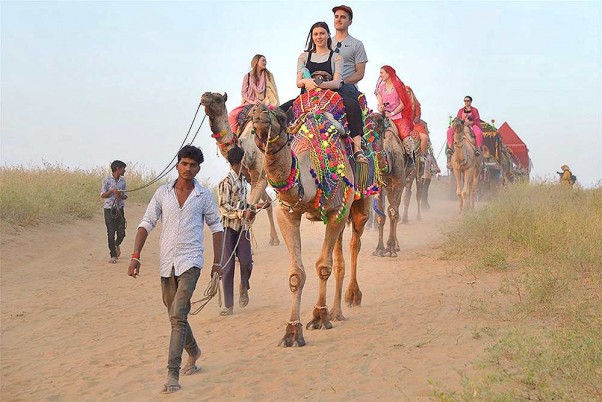 The stakeholders associated with the tourism industry have hailed the Rajasthan Tourism Trade (Facilitation and Regulation) Act, 2010 Amendment Bill, which makes misbehaviour with tourists, especially by touts, a cognisable offence in Rajasthan with the repeated offence being non-bailable.

The amendment has come in wake of tourism, being one of the key industries in Rajasthan. Every year state is visited by lakhs of domestic and foreign tourists. Before the Covid outbreak, the state witnessed 5.3 crore domestic and 16.3 lakh foreign tourists in 2019-2020.

At the popular tourist sites, touts locally called lapka, create trouble for many tourists. There have been complaints of touts misleading tourists to shop at certain shops at higher prices -to make money and get a commission. The police and the Tourism Department have taken action against 900 touts since 2018 but they are let off easily after paying a fine.

The tourism industry has hailed the amendment and called it the need of an hour. " We have been receiving complaints about the ' lapkas' who disguise as guides and mislead the tourists. Earlier there was no harsh punishment. This is a timely amendment that will safeguard the reputation of the state which caters to both domestic and as well as international tourists", Sanjay Kaushik, secretary of Rajasthan Association of Tour Operators told Outlook.

" The 2010 Act was brought in to prevent misbehaviour with the tourists and ensure that they go back with good experiences. But the Act did not specify whether the provision for punishment was cognisable or not, or whether it was available. Hence there was a need for an amendment to this Act, Now if a complaint is filed in court a lapka will not to allowed to go without any punishment", state minister for Tourism Govind Singh Dotasara told Outlook.

Dotasara in a reply to the bill in the assembly had said that Tourism Department has taken action against 208 touts in 2018, 462 in 2019, 194 in 2020 and 102 in 2021. But since the crime wasn't cognisable, a complaint is filed in court and the accused is let off after paying a fine. Following the 2010 Act, the state had started tourist police stations in Jaipur and Udaipur.

On Monday the Rajasthan Tourism Trade (Facilitation and Regulation) (Amendment) Bill, 2021, inserted a new section 27-A in the 2010 Act, the section is defined as “Offences to be cognizable". The sub sections 3 and 4 under section 13 of the 2010 Act have been made cognisable and non-bailable. Section 13 deals with the “prohibition of certain acts and activities in the tourist places, areas and destinations,” which prohibits touting, begging and hawking articles for sale in or around any tourist places.