Rajib Banerjee said he had a word with Union Home Minister Amit Shah who called him to the national capital. 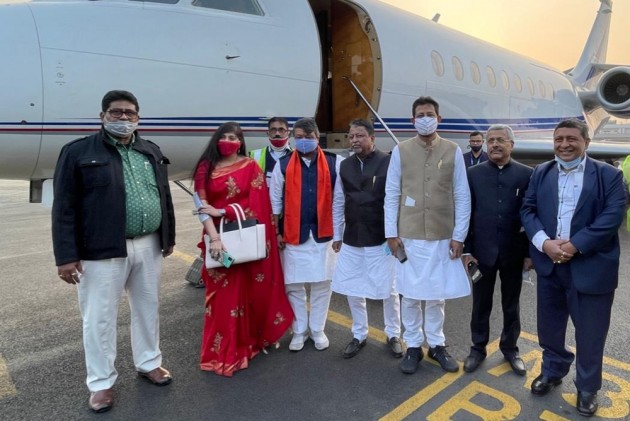 After quitting TMC on Friday, former West Bengal forest minister Rajib Banerjee is going to fly to New Delhi along with other disgruntled MLAs where they are likely to join the BJP.

Banerjee said he had a word with Union Home Minister Amit Shah who called him to the national capital.

"After I resigned from the TMC, I received a call from the BJP leadership.....Amit Shah ji told me to come over to Delhi. If I get assurances regarding the state's development, I will join the party," he told a Bengali news channel.

Banerjee and MLAs Prabir Ghosal and Baishali Dalmiya, who was recently expelled from the TMC, and former Howrah Mayor Rathin Chakraborty, will be flying to the national capital on a special plane, and meet central BJP leaders.

When asked what role does he expect to play in the BJP, Banerjee said it is for the party to decide.

"I want to work for people. So whatever role is assigned to me, I will accept," he said.

BJP sources said the former TMC leaders will take a special flight to Delhi. They may join the BJP today or come back and be inducted into the party at Dumurjula stadium programme on Sunday, a senior BJP leader said.

According to BJP sources, these TMC leaders were supposed to join the saffron party during Union Home Minister Amit Shah's rally at Dumurjula in Howrah on Sunday. However, Shah's two-day visit to West Bengal was cancelled at the last minute following a blast outside the Israeli Embassy in the national capital.

Union minister Smriti Irani will now deputise for Shah at the programme.

Ghosal told reporters that he will be flying to Delhi this afternoon and will join the BJP.

The ruling TMC in West Bengal was rocked by a fresh bout of desertions on Friday with Rajib Banerjee quitting the party and several other leaders rallying behind him.