Defence Ministre Rajnath Singh will also chair the Cabinet Committee on Parliamentary Affairs and be a part of the all-important panel on political affairs, headed by Prime Minister Narendra Modi. 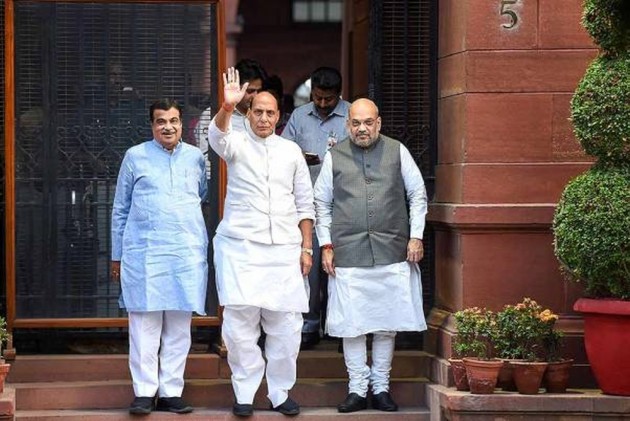 Defence Minister Rajnath Singh, who was made a member of two key cabinet committees including security, has been inducted into most of the Cabinet committees after the government initially kept him out of all but two of them has rebalanced the composition of key panels.

While an official statement on Thursday morning had Singh's name in only two Cabinet committees -- economic affairs and security -- the government affected a change at night, bringing him in four more panels; those on political affairs, parliamentary affairs, investment and growth, and empowerment and skill development.

In Newly-Constituted Cabinet Committees, Amit Shah In All Eight, Rajnath Singh In Two

Singh headed the Cabinet Committee on Parliamentary Affairs in the last government. The panel takes all decisions pertaining to Parliament matters.

The change came amid reports that the presence of Amit Shah, who was made home minister in the second Narendra Modi dispensation after Singh held the charge in the first between 2014-19, in all eight committees had highlighted his position as the second most powerful person in the new government.

Only two committees in which Singh's name does not figure are on appointment, which has traditionally had only prime minister and home minister as members, and on accommodation, a relatively low-profile panel.

Finance Minister Nirmala Sitharaman's name figured in all but one of the committees.

The government has reconstituted six committees to reflect the changes in the new dispensation and formed two new Cabinet panels to deal with issues like investment, growth, employment and skill development, amid concerns over economic slowdown.