BKU media in-charge Dharmendra Malik also said that Tikait was not arrested, even as cops warned of action against fake news. 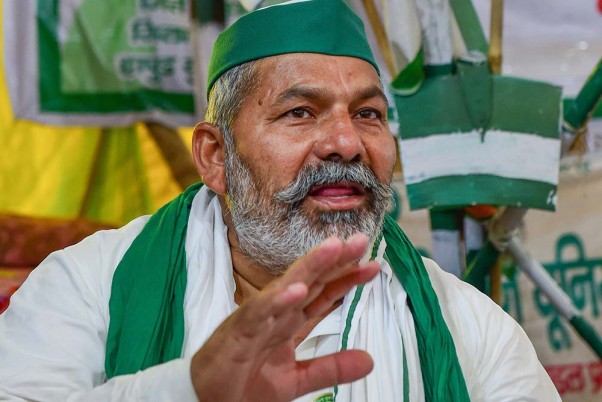 Amid rumours of the arrest of Bhartiya Kisan Union (BKU) leader Rakesh Tikait, Delhi Police said on Saturday that the reports were fake.  Delhi's Deputy Commissioner of Police (East) Priyanka Kashyap took to Twitter to dispel the rumours, even as farmers from across India decided to hold demonstrations in the national capital on Saturday to mark seven months of protest against the Centre’s recent agriculture legislations.

"Fake news! News related to the arrest of Rakesh Tikait is incorrect. Please stay away from such fake news/tweets. Action will be taken for spreading such false news/tweets," Kashyap tweeted.

Police also said that action will be taken against those spreading such fake news. BKU media in-charge Dharmendra Malik also said that Tikait was not arrested.

"Tikait was not arrested by police. He's still at the Ghazipur protest site where demonstration is underway against the farm laws. No conflict situation at the protest site," Malik said.

The Delhi Police on Saturday tightened security arrangements across the borders of the national capital in view of the anticipated protest march by the farmers protesting against the Centre's three farm laws.

On June 26, representatives of farmers will seek to submit memoranda to governors in various states. Delhi's Raj Niwas is located in the Civil Lines area.
Earlier, the Samyukta Kisan Morcha (SKM) on Friday submitted a memorandum to President Ram Nath Kovind urging him to direct the Centre to immediately repeal the three “anti-farmer laws”.

“We, the farmers of India, are writing this letter to you, the head of the nation, with deep anguish and indignation. Today on 26th June, upon the completion of seven months of our continuous protests at Delhi’s borders, and on the 47th anniversary of Emergency in this country, we are writing to you from all parts of India about the twin challenge of saving our agriculture and saving our democracy,” the memorandum stated.

The SKM in its memorandum also asserted that the Centre’s new laws are “unconstitutional” and “undemocratic”.