Union HRD Minister Ramesh Pokhriyal was addressing a convocation ceremony at IIT- Kharagpur when he said that the mythological bridge Ram-Setu was an engineering marvel made by Indian engineers. 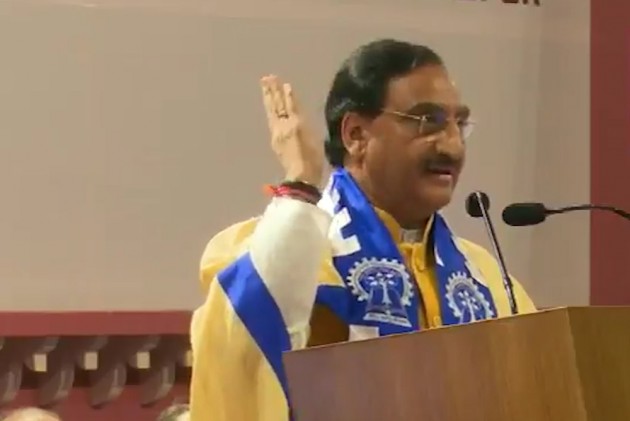 The Human Resource Development Minister Ramesh Pokhriyal, addressing students at  Indian Institute of Technology said that nobody should be in two minds about the fact that ancient bridge 'Ram-Setu' was built by Indian engineers whose "proficiency" astonishes the world even today.

The minister was addressing a gathering at the 65th convocation ceremony in IIT-Kharagpur on Tuesday.

"This is an engineering institute and will anybody be in two minds here about the proficiency of our engineers in the ancient times--who built the Ram Setu?" the Union Minister asked the students.

"Was it built by engineers from the US, Britain, and Germany? Ram Setu was built by our engineers and it astonishes the world even today," he added.

When the minister was met with silence after the statement, he said, "Is it right? Is it right? Please tell me, why are you silent?"

In another interesting remark drawn from Indian mythology, Pokhriyal said the way 'Neelkanth' is associated with Lord Shiva for saving the world by consuming poison, the Himalayas similarly absorb the toxic emissions of developed nations, safeguarding, thereby, the environment.

"There can be contradictions in what I am saying as no one has proved it scientifically. But there is an urgent need to think and conduct fresh studies on available facts," he said.

The minister said India has been the world leader in 'science' for ages and urged young engineers to conduct research on heritage marvels like Ram Setu to find out new truths about the country's glorious monuments.

"When we look behind, we remember how our engineers had built the Ram Setu and our upcoming engineers must delve into its study," he said.

As per Hindu mythology, the bridge was built by an army of monkeys for Lord Ram and his companions to cross over to Sri Lanka to rescue Sita.