Ready To Return If SC Assures Will Not Be Arrested: Zakir Naik

Islamic preacher Zaik Naik, who is living in Malaysia since 2016, says he is ready to return to India if the Supreme Court gives an assurance that he would not be arrested till his conviction 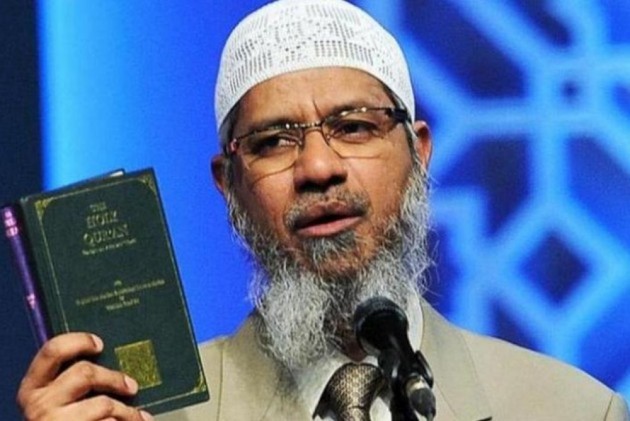 Islamic preacher Zaik Naik has said he is ready to return to India if the Supreme Court gives an assurance that he would not be arrested till his conviction.

Naik is living in Malaysia after fleeing from India in 2016. He has been given permanent resident status by the Malaysian government.

In an interview to 'The Week' magazine, the preacher said he has faith in the judicial system, but it was better before than it is now, he added.

"Before the BJP government came, you could speak against the government, and at least 80 per cent of the times you would get justice. Today, the chances are 10-20 per cent.

"Moreover, if we see the history, more than 90 per cent Muslims who faced terror charges have been let free after 10-15 years. So if I look at an average, I will be behind bars for about 10 years, and my entire mission would get disrupted. Why should I be a fool," he said.

The preacher said the NIA can question him in Malaysia, if they want.

When asked whether he will return to India if he has an assurance of justice, Naik said,"If there is an assurance from the Supreme Court of India, that if Dr Zakir Naik comes, they will not arrest me till I am convicted, I will come."

The preacher was booked by the NIA after his name cropped up during the probe of a terror attack on Gulshan's Holey Artisan Bakery (cafe) in Dhaka's posh diplomatic area, claimed by the Islamic State terror group.

Twenty people, mostly foreigners, were killed in the brutal late-night attack on July 1, 2016 after the attackers took diners and restaurant staff hostage.

The NIA had registered a case against him and his organisation Islamic Research Foundation (IRF) under anti-terror laws and for allegedly promoting enmity between groups on the basis of religion and race.

Naik said he has never told anyone to resort to terrorism.

"Have they [the arrested persons] said that I told them to do the bombing? The answer is no. I challenge anyone to say that he was inspired [by me] to kill innocent people. If he is saying that then he is lying," he said when asked about the attackers in Dhaka, Sri Lanka and now a Kerala youth, arrested for planning terror attack, taking his name.

On the allegations of money laundering by the Enforcement Directorate, Naik said he has one bank account.

"I have several companies and I am actually doing business. Is there a restriction in Indian law that a person cannot own companies? People have 50 companies and sometimes there are no transactions in some," he said.

Naik said they are also alleging that he sent money into his personal account.

"Now all that money I sent into my account was Rs 49 crore in seven years. I told you my earning is more than a crore a month and I have got a lot of businesses in real estate and other ventures.

"It will be a crime if I use some of the money for drugs or terrorism. They said Harmony Media is a factory of terrorism. If it is promoting terrorism then how come the US allowed my channel for so many years," he asked.