For the third time this monsoon, pounding rains paralaysed the country's commercial capital on Wednesday with total disruption in road and rail traffic, though flights were not hit severely. 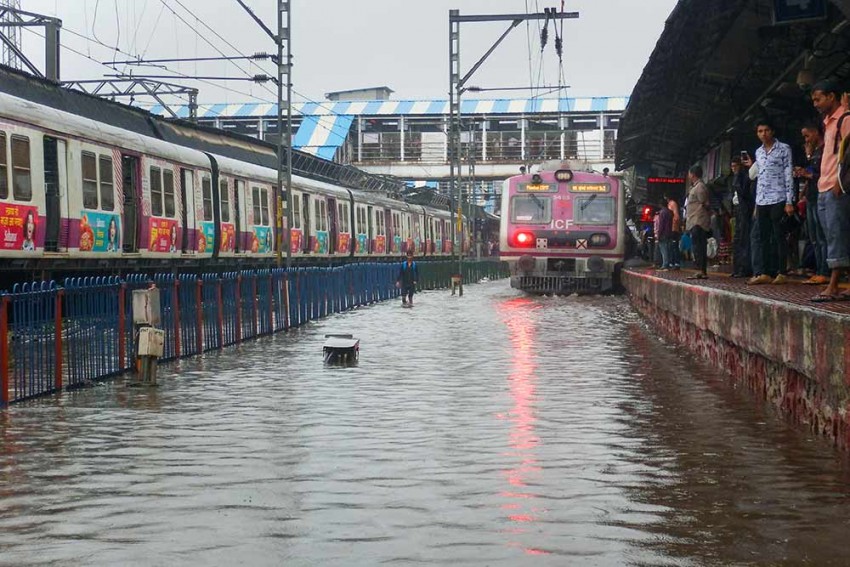 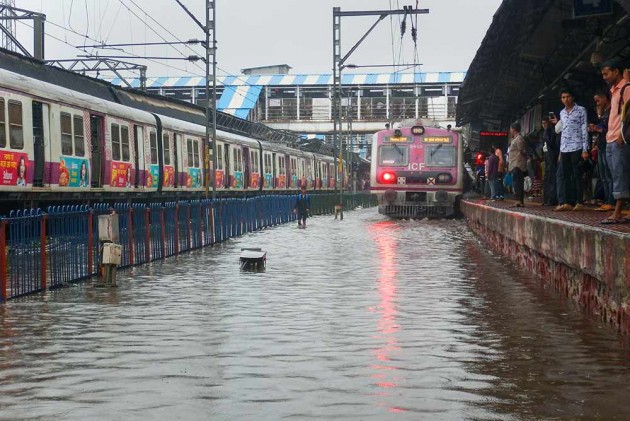 For the third time this monsoon, pounding rains paralaysed the country's commercial capital on Wednesday with total disruption in road and rail traffic, though flights were not hit severely.

Earlier, Mumbai had been brought to its knees on July 2/3 and August 3/4 when heavy rains clobbered the city, claiming nearly three dozen lives in various rain-related incidents.

Though a renewed bout of rains had started lashing the Mumbai Metropolitan Region since Monday, the city itself collapsed in the less than 18 hours of overnight rains since Tuesday evening.

In the past 36 hours, the India Meteorological Department said Mumbai, Thane, Palghar and Raigad districts averaged a whopping 25-30 cms rains, while Vasai-Virar belt in Palghar got a staggering 50 cms rains.

The IMD has issued a 'Red Alert' for Mumbai and surrounding districts which could be lashed by very heavy rains over the next two-three days.

As a precautionary measure on Wednesday, the government declared a holiday for all public and private schools in these districts, advised people to venture outdoors only if necessary and exercise other safety measures.

This afternoon, the NDRF, Indian Navy and Mumbai Police came to the rescue of around 1,500 people stranded in the flood waters of Mumbai's sole flowing freshwater body, the Mithi River which overflowed and entered their homes in Krantinagar area of Kurla.

Though the city's lifelines - Western Railway and Central Railway - continued to function with hiccups, by noon, the local and long-distance services had to be suspended due to heavy waterlogging on railway tracks at different locations.

WR was suspended for several hours between Churchgate-Andheri and Vasai-Virar due to waterlogging near Mahim-Matunga.

However, by 6 p.m., the trains were restored between Churchgate-Vasai, though tracks on the Vasai-Virar sector were still submerged after over 50 cms rainfall in the area, said a WR spokesperson.

Many low-lying areas in the city including Sion, Wadala, Dadar, Parel, Kings Circle, Matunga, Chunabhatti and in suburbs Andheri, Jogeshwari, Santacruz, Malad, Borivali, Mulund, Bhandup, Kanjurmarg, Vikhroli, Kurla and surroundings were flooded in one or three feet and more water, in many areas water entering people's homes on the ground floor.

Roads on the exteriors like Mumbai-Goa Highway, Mumbai-Pune Expressway, Ghodbunder Road, Mumbai-Ahmedabad Highway, Mumbai-Navi Mumbai Road, and others also experienced huge traffic snarls as the snowballing effect of the conditions in Mumbai.

In several places, big and small vehicles were stranded in the flood waters forcing their occupants to abandon them, which added to the traffic jams.

Virtually caught unprepared by the overnight downpour, people had to wade in knee-deep to waist-deep waters for their normal chores, while in Ganesh Talao area of Kandivali, locals deployed a make-shift raft to ferry people in the flooded areas.

The BMC had made arrangements for stranded commuters at various locations near railway stations where they could spend the night with the railways and NGOs making arrangements for food and snacks.

"All Ganeshotsav mandals are requested to check for any water seepage and whether any power lines are touching water. They must exercise extreme caution and switch off power supply to the marquees (pandals) to ensure safety of all," Dahibavkar urged.

The famed Lalbaug-cha Raja - where devotees queue up for 12-18 hours for a 'darshan', could manage it in barely 10 minutes today!

The Andhericha Raja venue was flooded with four feet water, in Nala Sopara the Sainath Mitra Mandal shifted its idols up by nearly a metre after the entire pandal was flooded in 5-6 feet of water. There are no reports of any damage to any marquee or idols from anywhere.

Shootings of several Bollywood films and teleserials had to be cancelled as water seeped in studios and outdoor locales sites. Sunny Deol postponed the trailer launch of his son Karan's debut "Pal Pal Dil Ke Paas" while waterlogging was seen outside Amitabh Bachchan's Juhu bungalow 'Prateeksha' this afternoon.