Replica Of Shaheen Bagh: Thousands Of Women Stage Protest In Prayagraj Against CAA

'If our sisters can protest in Shaheen Bagh, we can do it here too,' says a protester, Renu Varma, a mother of three. 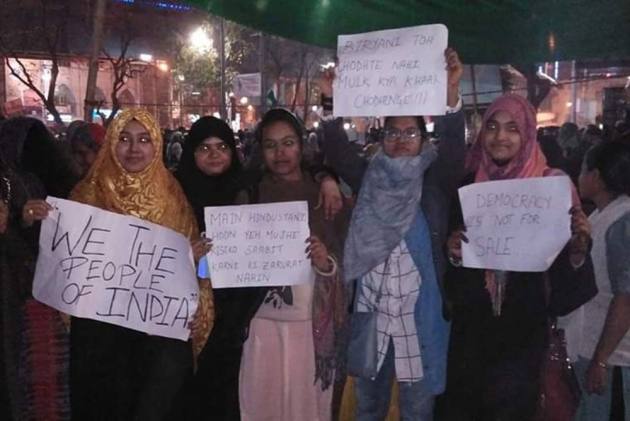 The protests in Delhi's Shaheen Bagh, led by women from last one month, have found a reflection in Uttar Pradesh's Prayagraj.

Uttar Pradesh saw massive and violent anti-Cittizenship Act protests and the subsequent police crackdown in December last year. More than 20 people were killed during the protests.

But with thousands of women, who are staging a sit-in at the Mansoor Ali Khan Park to voice their dissent against the citizenship law, the protets are witnessing a massive shift.

The change, protesters say, was inspired by Shaheen Bagh that has emerged as the face of peaceful protests against the new legislation.

The women in Prayagraj had earlier decided to hold the sit-in for a day, but taking a cue from Shaheen Bagh, they have not budged for last four days.

There are more than 5,000 women, men and children are camping at the park, braving the freezing temperatures -- a replica of Shaheen Bagh where people of all ages and professions have been staging sit-in round the clock.

"We have been inspired by Shaheen Bagh. If our sisters can protest there, we can do it here too," says a protester, Renu Varma, a mother of three.

Now and then a speaker from student organisations, affliated with Left or Samajwadi Party, addresses the protesters.

The protesters say they will not budge until the government listens to their demands.

"I just want to say that we will be here for as long as required, till someone from the government speaks to us," says Fatima, an octogenarian who has joined the protest.

Others nod in agreement and say that the protest will be called off only after a dialogue with a government representative.

Anjali, a student of Allahabad University, stands with a poster that says, "Hum ab bhi chup rahe to hamare liye koi kuch bhi nahin bolega (Even now if we remain silent, no one will ever speak for us)."

Anjali says she is not affiliated to any political or student outfit, but "the issue demands the attention of every citizen".

Her friend Samina Khan echoes her words: "If we do not speak up now, the country will be in flames. We do not live in isolation and have to come together for such issues."

Kamini Gupta, a homemaker, has come to join the protest, leaving her two children in the care of her husband.

The protesters on Tuesday even celebrated 'Makar Sankranti' by cooking 'khichdi' at the protest venue itself and shared it among themselves.

Some women went for a holy dip at the Sangam and returned to get their faces painted with the tricolour.