'Reply To Those Who Taunted Me,' Says Jharkhand Education Minister After Enrolling For Class 11

Hailing from Alargo village in Bokaro district, Jagarnath Mahto passed Class 10 in 1995, with a second class division. However, he discontinued because of his political and social engagements. 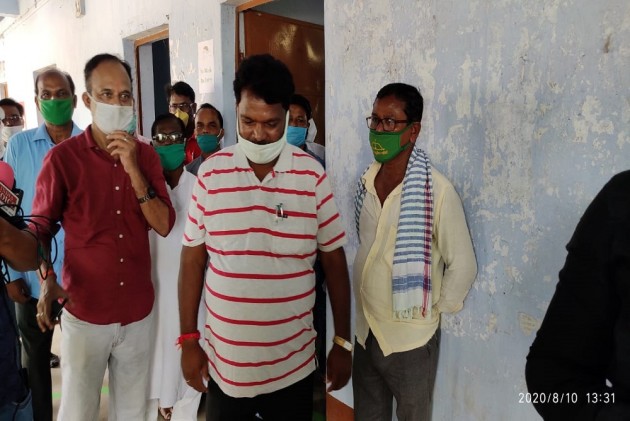 Earlier this week, administrators at Devi Mahto Inter College in Bokaro, Jharkhand were in for a surprise after an unusual student turned up to enroll for Class 11 admissions— none other than the state education minister, Jagarnath Mahto, who was in the queue filling up application forms for the new academic year.

At 53, it’s a new beginning for Mahto, who discontinued his studies in 1995 after passing the Class 10 exams. The minister says his decision to resume studies was propelled by disheartening comments made by his detractors. He was labelled an ‘unqualified minister’ after taking charge as the education minister in the Hemant Soren cabinet in Jharkhand. “When I took the oath, some people commented on what a matriculate can do as an education minister. That day, I promised myself that I will study further and help others study too,” Mahto tells Outlook.

Is he excited about going back to school at this age? “Classes are not happening because of the pandemic. Let the classes begin,” he quips. The HRD minister is also happy that many are finding his story inspirational after the news of his ‘return to school’ was widely reported in the media.

The minister is also confident that he will be able to juggle ministerial duties and studies in a balanced way. “I will pursue my studies along with official responsibilities. Studies are not going to be a hindrance in serving people,” says Mahto, who is a four-time legislator from Dumri assembly constituency of Giridih.

The Jharkhand Mukti Morcha (JMM) leader believes in the adage that ‘where there is a will there is a way’. It is too early to say whether he can secure 75 per cent attendance to appear for exams, he says.  “In case, I fail to fulfill the 75 per cent attendance requirement, I will approach the court to explore options. Whatever the outcome, I will abide by the rules,” he says.

Hailing from Alargo village in Bokaro district, Mahto passed Class 10 in 1995, with a second class division. However, he discontinued because of his political and social engagements. Politics was always in his blood as he joined the movement for statehood for Jharkhand during his school days.

“When I was in high school, I joined the agitation led by JMM leader Shibu Soren against the exploitation of the poor and the tribal in the state. I left my studies and also took part in the struggle for a separate state,” he says.

Incidentally, Devi Mahto Inter College, which he sought for admission, was set up by Mahto in 2005 during his first term as an MLA. The minister has opted for the Humanities stream since his interest lies in political science and other topics. “My interest is to study political science,” he adds.

As an education minister, his goal is to improve the condition of the ailing government schools in the state. The government has already announced plans to set up model schools in each of the 4,416 panchayats. “Our government schools are still lagging behind on many fronts. There is an acute shortage of teachers and steps are being taken in this regard too,” he said, adding that the New Education Policy (NEP) announced by the central government is an eye wash and his government is deliberating on state’s concerns regarding this.

Mahto also dismissed reports that teachers in the government-aided school, where he sought admission, were not paid salaries for the past four months.

“Because of the corona situation, the funds got delayed.  It’s sorted now,” says the minister.