AMU students claim the Republic TV crew entered the campus despite not getting permission from the PRO and its reporters were referring to the institution as a "university of terrorists". 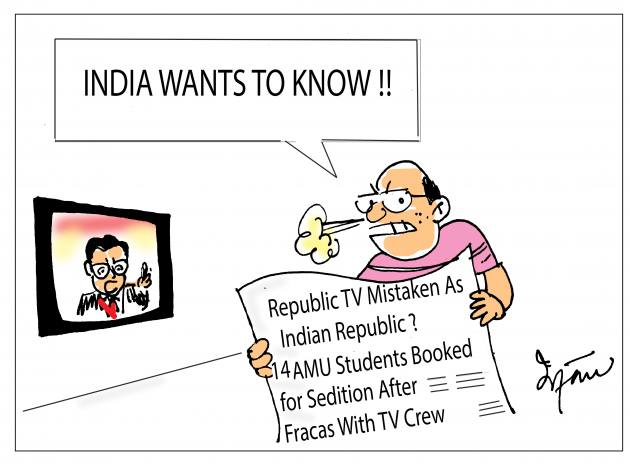 Fourteen students of the Aligarh Muslim University (AMU) were booked for sedition on Tuesday evening after an altercation with journalists from news channel Republic TV.

The police filed an FIR against the students based on a complaint filed by BJP Yuva Morcha president.

The university’s students union has called the FIR “false” and claimed that a few BJP and RSS workers and Republic TV crew entered the campus “to disrupt an ongoing meeting”.

'Wake Up Everyone, Don’t Be Afraid': Manipur Journalist In Jail Awaits Justice

Journalist's Arrest: In Manipur, Judic­iary Is Being Progressively Dwarfed By Executive

AMU students claim the Republic TV crew entered the campus despite not getting permission from the PRO and its reporters were referring to the institution as a "university of terrorists".

Hamza Sufyan, AMU students union vice president, alleged that the TV crew misbehaved with the security officials and kicked up a row when asked to leave the campus.

“The reporters of Republic TV did not have the permission to cover the event or enter the university campus. When they were stopped by the Proctor’s office, they misbehaved with security officials and got into a confrontation and referred to the institution as the “University of Terrorists,” Sufyan claimed.

However, Republic TV journalist Nalini Sharma claimed in a tweet that she had done nothing to provoke the students.

This is ABSOLUTE LIES! I’m appalled at how this has been created out of thin air. I was MYSELF standing and reporting on a story that had NOTHING to do with AMU when the students began to heckle and threaten us. We weren’t even speaking to any student in the vicinity! https://t.co/jHuupm9nNK

Another AMU student Sharjeel alleged that the BJP and RSS workers also entered the campus and misbehaved with security officials and students. He claimed the BJP Yuva Morcha president was carrying a pistol and shot at AMU students union secretary Huzaifa Amir.

Sufyan said they were conducting a meeting with Muslim political parties of Uttar Pradesh, but a false FIR had been registered against them which claims they raised slogans like "Pakistan Zindabad, Hindustan Murdabad".

“We have been charged with sedition, rioting and robbery. But they have no such evidence available. We have challenged administration that if they find even a single evidence against us, we will present ourselves before them for arrest,” Sufyan told Outlook.

He alleged that one of the students against whom sedition charges have been slapped - Maskoor Ahmad Usmani, former president of AMU students union, was in Delhi when the incident happened.

When asked whether AIMIM MP Asaduddin Owaisi was invited to the event, the students union vice president said: “Yes, we had invited Owaisi but he couldn’t come due to some reasons, maybe he couldn’t come because of the Parliamentary session.”

Sufyan alleged the ruckus was created because of two reasons- 1) that we had invited Owaisi and 2) to ensure that the meeting to form an alliance doesn’t become a success because BJP doesn’t want any front to stand against them.

After the incident, security was increased at AMU and the Rapid Action Force was deployed around the campus as a precautionary measure.

An AMU spokesman said a TV channel team had an altercation with some students while they were filming inside the campus. The team was there to cover an event.

The spokesman said the channel had not sought permission from authorities for live coverage and when university staff members pointed this out, there was a heated exchange in which some students were also involved.

Complaints were lodged at the Civil Lines Police Station, by both by the AMU authorities and the TV channel crew.

A complaint was also filed by some Akhil Bharatiya Vidhyarthi Parishad (ABVP) members who alleged that they were beaten up near the Faiz Gate and a motorcycle, belonging to one of them, was set on fire.

Senior Superintendent of Police Akash Kulhari told PTI that a number of complaints were given by different groups at the Civil Lines police station and the police were still in the process of filing these reports.

Meanwhile, a large group of students from the university collected at Bab-e-Syed gate, demanding the suspension of Ajay Singh, a prominent ABVP leader who is a postgraduate student in the Faculty of Law.

He is the grandson of BJP MLA Dalvir Singh.

Late Tuesday night, cases under sections 124-A (sedition), section 307 (attempt to murder) and eight other sections of the IPC were registered against nine students of the AMU, including the President of Students Union Salman Imtiaz and the vice president of AMU Students Union Huzaifa Aamir on the complaint of ABVP activist Mukesh Lodhi.

Meanwhile, AMU has issued an advisory to the students asking them "not to move out of the campus as a precautionary measure".