Resolution Is Not Possible When Sanctity Of Agitation Is Lost: Narendra Singh Tomar

Agriculture minister Narendra Singh Tomar said the three farm reform bills were passed in Parliament for farmers' benefit and will increase their income. 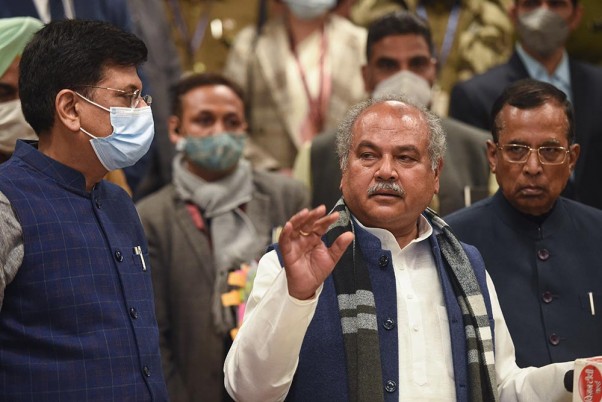 With the talks between government and farmer unions reaching no conclusion, Agriculture Minister Narendra Singh Tomar said on Friday, some "forces" definitely want protests to continue for their own personal and political motives and no resolution is possible when the sanctity of agitation is lost.

The Agriculture Minister said the farmer unions have been asked to respond till Saturday if they accept the government's proposal of putting the farm laws on hold and forming a joint committee to reach a favorable solution, after which the talks can continue.

"We also told farmers to give their own proposal, other than the repeal of Acts, if they have got anything better than our offer," Tomar told reporters after the 11th round of talks at that lasted for almost five hours but included less than half an hour of active discussion between the two sides.

Asked whether he expects the farmers to agree to the government offer, he said, "I don't want to speculate, but we are hopeful that farmer unions will consider positively our proposal."

On whether he saw any division among the union leaders on the government proposal, Tomar did not give a direct reply but said, "We thanked all farmer leaders, including those who support our proposal and those who are against it."

"We should remain hopeful. Let's wait till tomorrow to hear farmer unions' final decision," he said.

Taking a hardline position, the minister said some external force was definitely trying to ensure that the agitation continues and those were obviously against the interests of farmers.

"Govt gave many proposals to end the protest, but no resolution is possible when the sanctity of an agitation is lost," he said.

Tomar said the three farm reform bills were passed in Parliament for farmers' benefit and will increase their income. The ongoing agitation is mainly by those from Punjab and some from a few other states, he added.

Tomar said the talks between the government and farmers are continuing since October 14 and there have been 11 rounds so far, including one with officials and others with the ministers.