On April 7, the administration had imposed the restrictions on the national highway (NH-44) connecting Jammu to Srinagar, days after the Pulwama attack that killed 40 CRPF personnel. 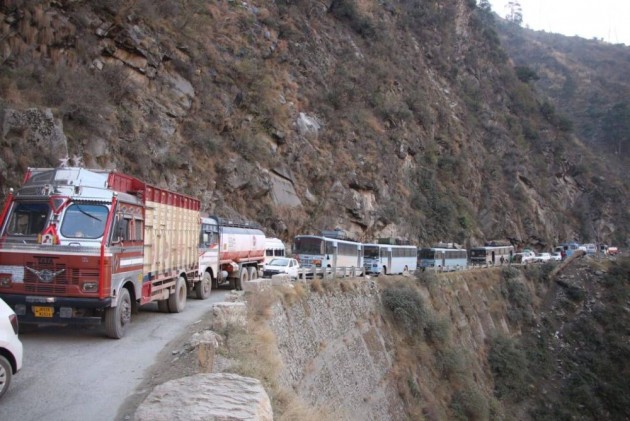 The Jammu and Kashmir governor administration Saturday partially relaxed the two-day-a-week restrictions on the movement of civilian traffic on the Srinagar-Jammu National Highway which were put in place to facilitate movement of security forces' convoys.

On April 7, the administration had imposed the restrictions on the national highway (NH-44) connecting Jammu to Srinagar, days after the Pulwama attack that killed 40 CRPF personnel.

The restrictions barred civilian traffic from plying on the highway on Wednesdays and Sundays from 4 am to 5 pm till May 31.

The move had attracted widespread condemnation, especially in the Valley.

"The restriction on civilian movement between Srinagar and Baramulla on national highway-44 would now be limited only to Sundays with effect from April 22. There would be no prohibition on civilian traffic on Wednesdays," an official spokesman said here.

However, he said the restrictions would continue between Srinagar and Udhampur on NH-44 as earlier.

He said the administration is monitoring the convoy needs of security forces on a real time basis and making all attempts to minimise public inconvenience.

"For example, no restrictions were imposed on April 17, although it was a convoy day (Wednesday) as there was no need for movement of security forces' convoys," the spokesman said.

"The government has once again reviewed the requirement of security forces, particularly in the light of successful conduct of elections in Baramulla and Jammu (Lok Sabha constituencies) on April 11 and Srinagar and Udhampur on April 18. As the requirement of security forces is now reducing as they are de-inducted, the government has decided to partially relax the restrictions," he said.

The spokesman said the situation would be reviewed periodically and relaxation would be made as the need for restriction reduces.

He said the restrictions on civilian movement on the highway were imposed to ensure adequate security to the movement of security forces' convoys while at the same time minimising public inconvenience.

"There has been a large movement of security forces on an unprecedented scale after the Pulwama terror attack. These forces were required both for anti-militancy operations and for conducting general elections peacefully.

"To facilitate unhindered and secure movement of security forces' convoys, the government had imposed a prohibition on civilian traffic on the highway from Baramulla to Udhampur twice a week -- Sunday and Wednesday -- from 4 am to 5 pm," the spokesman said.

He said although this was only for 15 per cent of the total time in a week, the government was also keen to minimise inconvenience to the public.

Elaborate arrangements were made by the local administration to facilitate the movement of public during the period of restriction like provision of travel passes for covering various emergencies, including medical emergencies, school buses, students appearing in examinations, government employees on duty, hospital staff on duty, passengers travelling by air, political persons needing to campaign, he said.

Besides, over 100 executive magistrates were deployed to ensure smooth movement of security forces' convoys and also facilitate civilian movement, the spokesman said.

He said additional arrangements at the local level have been made to facilitate public movement.

Even on the days of restrictions - Sunday and Wednesday between Srinagar and Udhampur and on Sunday between Baramulla and Srinagar, the local administration would continue to facilitate movement of civilian traffic as has been happening in the last two weeks, the spokesman said.

Further, he said, the local administration and police would examine the possibility of allowing public transport of the State Road Transport Corporation (SRTC) to ply during the period of restriction on the highway even on convoy days.

A complete review of restrictions on the highway would be done after the last phase of elections on May 6 to examine the need for continuing with them, he said.

"The purpose of these restrictions is in the larger interest of security of everyone," the spokesman said.

He appealed to the people to extend full cooperation in the smooth regulation of traffic.