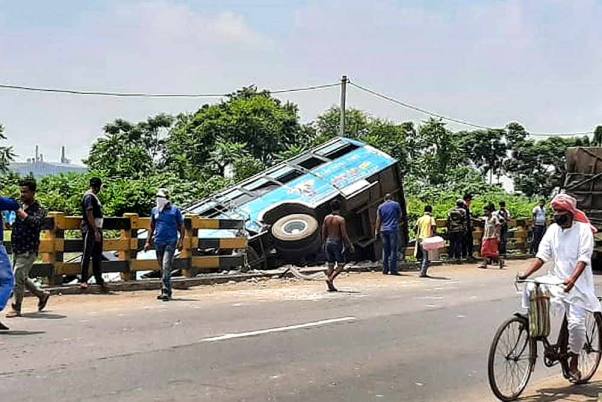 What was planned as a celebration of laughter turned out to be silence for 11 schoolmates in their 40s on their way to Goa.

All 11 of them were girl students of the 1989 batch from Saint Paul's School at Davangere. All of them were in their mid-40s and were travelling in the mini-bus that collided with a tipper-lorry at Itigatti village near the city on Friday, killing them.

The group had planned a three-day stay in Goa and two of them had taken their daughters along.

According to police, 14 had left for Davangere in the van in the morning. While 13 of them hailed from the district headquarters town of Davangere, one was from Bengaluru.

They were on the way to pick up their former classmate from Dharwad when the accident happened, police said.

The driver and cleaner hailed from Ranebennur, the police said.

The police said two of the injured were in a critical state.

One of them, Veda, has been airlifted and admitted to a hospital in Bengaluru for treatment.

One of their classmates who had visited the hospital said the trip was planned a week ago during a meeting in Davangere.

Police have registered a case in this regard and have started investigations.

Man Arrested For Making Obscene Video Of Woman Officer, Blackmailing In UP