The submissions were made in response to a plea filed by Foundation for Media Professionals seeking restoration of 4G internet services in the union territory in view of the prevailing COVID-19 pandemic. 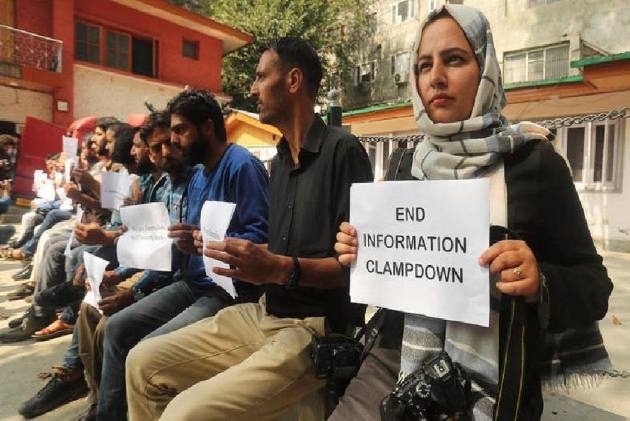 Jammu and Kashmir administration Wednesday invoked “very peculiar geo-political position of Jammu & Kashmir and its geographical proximity with Pakistan” in the Supreme Court as one of the arguments for not restoring high speed internet in Jammu and Kashmir. The government also quoted Professor of Law and Public Policy, Pepperdine University, Gregory S. McNeal that “terrorist organisations have also begun to employ websites as a form of information warfare” in its defence.

The submissions were made in response to a plea filed by Foundation for Media Professionals seeking restoration of 4G internet services in the union territory in view of the prevailing COVID-19 pandemic.

The submissions have come after the Supreme Court in a landmark judgment in January this year declared access to the internet a fundamental right.

On August 4, 2019, a day before the Centre revoked Article 370 of the Constitution and bifurcated Jammu and Kashmir into two Union Territories, the government imposed communication blockade. Communication was restored gradually but internet service has confined to 2G low speed connectivity only.

In its submission before the Supreme Court, the Jammu and Kashmir administration said, “the orders imposing restrictions are reviewed by the review committee, headed by the Chief Secretary of UT of J&K, and due consideration is accorded to the inputs furnished by the law enforcement/intelligence agencies.”

The submission read: “It is pertinent to mention that the prayers prayed for by the petitioners and the present affidavit needs to be appreciated in light of the fact that since 1990, 41866 persons have lost their lives in 71038 incidents throughout  the erstwhile State of J&K. This includes 14038 civilians, 5292 personnel of security forces and 22536 terrorists.”

“These figures depict the nuances and emphasis the unavoidable requirement of reasonable restrictions given the very peculiar geo-political position of Jammu & Kashmir and its geographical proximity with Pakistan,” the response reads.

The administration told the apex court that contentions raised by the petitioners in respect of an alleged deprivation of access to education, healthcare facilities and to justice itself with 2G internet speed are incorrect and it is taking all possible steps to ensure that minimum impact of COVID-19 situation is felt.

The increase in internet speed is verily apprehended to lead to swift uploading and posting of provocative videos and other heavy data files, the affidavit said.

"Various Pakistan-based terror outfits are leaving no stone unturned to exploit the present situation as seen by recent infiltration attempts in handling of which many personnel of security forces have lost their lives," it said.

“Many hashtags are being used by Pakistani handles to glorify Pakistan Army and terror outfits/terrorists and portray them as “fighters” for Kashmir’s “struggle”.  Current discourses of social media campaigns infer that Pak handles are aiming to incite violence amongst College and University students. The increase in internet speed is verily apprehended to lead to swift uploading and posting of provocative videos and other heavy data files,” says the submissions.

It also says that from August 5, 2019 to April 25, 2019, 108 militancy related incidents have taken place in Jammu and Kashmir in which 99 Incidents were reported from Kashmir province and 09 from Jammu province.  It says in these incidents 30 civilians were killed and 114 civilians injured.  It also says 20 security forces personnel were killed and 54 were injured. It says 76 militant were killed 132 militants or militant suspects were arrested.

“It is submitted  that even  when internet  services were restored only with white-listed URLs, it was found that miscreants were using different VPNs but because of low speed mobile data services, were not able to upload files of heavy data containing incriminating and other objectionable videos. Now that the restrictions on use of social media have been eased, if speed is not limited to 2G, the high speed internet will enable the spread of any fake news/rumors and transfer of heavy data files (audio/video files) will become prevalent which may be utilized by terror outfits  for  incitement as also in planning attacks,” it says.

While the petitioners had contended that well-functioning internet in times of the crises like Covid-19 is an essential part of digital infrastructure, J&K government submitted that current internet speed combined with broadband services in enough to deal with Covid effectively.