The purported call from Lalu, who is at Ranchi, serving sentences in a number of fodder scam cases, to Pirpainti MLA Lalan Paswan appears to have been made on Tuesday 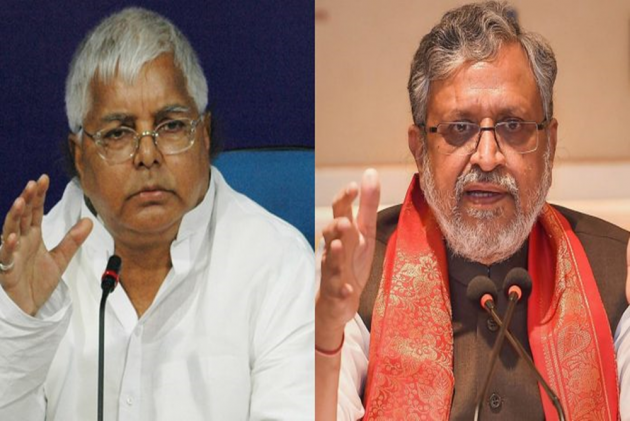 The opposition Rashtriya Janata Dal in Bihar was on Wednesday left with egg on its face when the social media went abuzz with an audio clip, of the party’s maverick jailed president Lalu Prasad purportedly telephoning a BJP MLA in a horse-trading bid.

The purported call from Prasad, who is at Ranchi, serving sentences in a number of fodder scam cases, to Pirpainti MLA Lalan Paswan appears to have been made on Tuesday while the latter was having a meeting with veteran BJP leader and former Deputy CM Sushil Kumar Modi.

Modi, a trenchant critic of the RJD supremo, had late Tuesday night tweeted that Prasad was trying to poach NDA MLAs, alluring them with the promise of ministerial berths.

He spilled the beans on his Twitter handle shortly before the Assembly elected BJP leader Vijay Kumar Sinha as the Speaker.

In the audio clip, which is barely a minute and a half long, the caller, a lackey of Prasad, dials the MLAs number and the mobile phone is picked up by the legislators' PA who is perceptibly surprised to learn that the RJD supremo wanted to speak to his boss but hands over the phone to Lalan Zaswan promptly.

In response to the MLAs "pranaam", Prasad, many years his senior, utters "khush rahiye" (be happy), a familiar form of greeting made by the elderly in Bihar.

Speaking in his distinct voice and trademark accent, Prasad can be heard telling the BJP MLA "tomorrow the Speaker is going to be elected. You remain absent. We are going to topple the government. You will be made a minister later on".

The BJP MLA, who wrested his seat from sitting RJD legislator Ram Vilash Paswan in the recently-held assembly elections, sounds flustered and mumbles "it does not look proper, I am in the party".

Prasad, who sounds his usual ebullient self, responds dismissively, asking him to tell party bosses that he has got afflicted with corona and remain absent. The BJP MLA hangs up sounding non-committal.

Talking to reporters inside the assembly premises, Lalan Paswan said, "I had received the call thinking that Lalu Prasad wanted to congratulate me upon my victory.....I was at the residence of Sushil Kumar Modi and I told him what had transpired".

Interestingly, the mobile number from which the call was purportedly made, which Modi had shared on Twitter on the previous night and claimed to have dialled and told Prasad that his "dirty tricks" will fail, has since been switched off.

Reports in a section of the media claim that the number belonged to Irfan, Prasad's personal attendant who has been allowed access to the ailing septuagenarian at the RIMS hospital in Ranchi where he is lodged because of numerous complications.

The RJD candidate Awadh Bihari Chaudhary, meanwhile, lost to Sinha and Modi hailed the development with a tweet "Lalu Prasad's dirty tricks have been foiled".

In Hyderabad, Union minister Smriti Irani told a press conference "the RJDs propensity to use illicit means for achieving power is the very reason it was rejected by the people of Bihar in the assembly polls".

Smaller players like Mukesh Sahni, a Bihar minister who is the founder of fledgling Vikassheel Insaan Party and snapped alliance with the RJD ahead of the assembly polls, also seized the opportunity to target its domineering former coalition partner.

"Much have been said about democracy on the floor of this House. But those who care about democracy would never make telephone calls from jails", Sahni had remarked in the speech he delivered to congratulate Sinha upon being elected as the Speaker.

Leaders of the RJD, who remained voluble during the assembly proceedings, remained understandably tight-lipped over the issue which could end up as yet another blemish on the party accused of having ushered in "jungle raj" while it was in power.

Some of its leaders said on condition of anonymity, hoping against hope, "it could be a mischief. Lalu Prasad's voice is famous and there are so many excellent mimics out there".

They, however, also sounded sceptical of their own belief as their leader, known to pull no punches, has not issued a denial so far.

However, the RJD could continue to suffer the image deficit despite being the single largest party in the assembly, having won 75 seats, if the swagger exhibited by its debutant MLA Mukesh Raushan was any indication.

"There is going to be a major shake-up by March when Tejashwi Yadav will become the Chief Minister. Members of all the major parties in the NDA are going to break ranks", Raushan had told reporters outside the assembly, apparently unmindful of the fresh controversy his party had got mired in.

Predictably, none of the RJDs allies Congress, CPI (ML), CPI and CPI(M)  which together have 40 MLAs  chose to come to the defence of the senior coalition partner or rebut the attacks from the NDA.