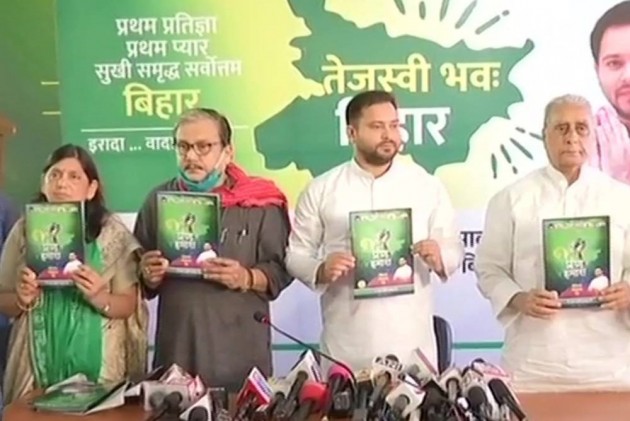 Taking a swipe at the BJP's promise of 1 crore jobs, Tejashwi Yadav said, “I could have also promised one crore jobs just for the sake of promise."

According to media reports, he said, “I am promising 10 lakh jobs. I could have also promised one crore jobs just for the sake promising. But I am not doing that because this will become a reality in the first meeting of the cabinet. This will be the first time in the country that 10 lakh employment opportunities will be created at one go. This figure is what we require in the state’s workforce at present.”

With Tejashwi’s promise of 10 lakh jobs, job creation in Bihar as a poll promise has occupied the centre stage.

Tejashwi, who is the chief ministerial candidate for the Mahagathbandhan in Bihar, titled the party’s 17-point manifesto as "Hamara Pran" (Our resolution).

Other mainstream parties in Bihar like Lok Janshakti Party (LJP), BJP and JD (U) have also released their manifestos, with the BJP’s manifesto promising free Covid-19 vaccination attracting flak from many political parties.

On October 17, Mahagathbandhan in Bihar launched its manifesto which also promised to provide 10 lakh permanent jobs.

Bihar will vote for a new government on October 28, November 3 and 7. Results will be declared on November 10.