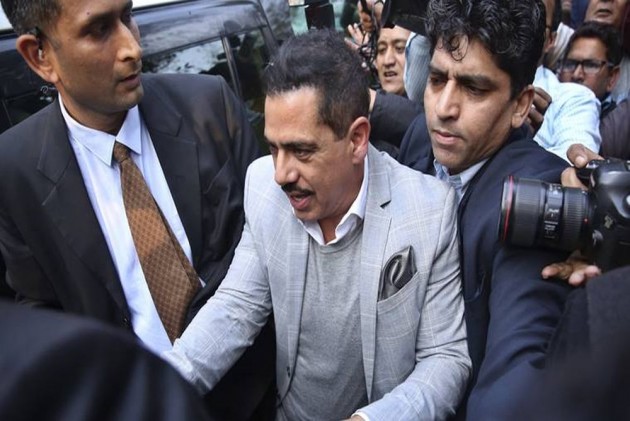 Robert Vadra, brother-in-law of Congress President Rahul Gandhi, was grilled for over nine hours by the Enforcement Directorate as he appeared for the second round of questioning on Thursday, and also confronted him with his mails exchanged with a relative of absconding arms dealer Sanjay Bhandari, sources said.

Vadra has been asked to appear before the ED on Saturday at 11 a.m.

On Thursday Vadra was asked about the mails he exchanged with Sumit Chadha in reference to a London property, the ED sources said.

Vadra was also asked how he knew Bhandari and Chadha and what business transactions they had.

According to sources, Vadra was confronted with the emails he exchanged with Chadha for the payment of the renovation of a London property.

The ED officials also asked Vadra about his account details.

The case relates to the ownership of 1.9 million pounds of undisclosed assets abroad, allegedly belonging to Vadra.

A money laundering case was registered against Vadra's close aide Manoj Arora after his role surfaced during a probe by the Income Tax Department into another case under the new Black Money Act and tax laws against Bhandari.

The London property was allegedly bought by Bhandari and sold in 2010 for the same amount despite incurring additional expenses on its renovation.

Vadra arrived at ED's Jamnagar House office in central Delhi at 11.20 a.m. Unlike the first day, the businessman was not accompanied by his wife Priyanka Gandhi, who had dropped him off at the office on Wednesday.

The financial probe agency source said that the ED also asked Vadra about his transactions and business dealings.

On Wednesday, Vadra was questioned by the ED for six hours -- for the first time that he faced any of the investigating agencies.

On December 7, 2018, as part of the investigation, the ED conducted searches at a number of premises in Delhi-NCR and Bengaluru.

The ED told a city court earlier that the London property was part of the kickbacks received in a petroleum deal. The money was transferred by Santech International, FZC, a UAE-based company controlled by Bhandari.

Arora, who is an employee of Vadra's Skylight Hospitality LLP, is a key suspect in the case as he is aware of the overseas investments and purchases made by his employer.

The questioning came in the wake of an order by a Delhi court on February 2 directing Vadra to appear before the ED for questioning while hearing the anticipatory bail plea filed by him.

Vadra was on February 2 granted interim bail for a fortnight.