The case relates to ownership of 1.9 million pounds of overseas assets by Robert Vadra. It pertains to undisclosed foreign assets and entities meant to evade tax. 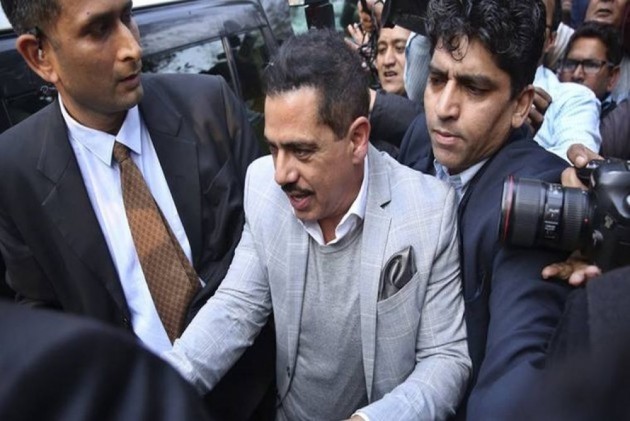 The Delhi High Court on Monday asked Robert Vadra, the brother-in-law of Congress President Rahul Gandhi, to file a reply on the Enforcement Directorate's (ED) plea, seeking to cancel his bail in a money laundering case.

Justice Chander Shekhar issued a notice to Vadra and his close associate, Manoj Arora, listing the matter for July 17.

The ED has pressed for Vadra's custodial interrogation, saying that he was not co-operating with the investigation.

He was granted anticipatory bail by a trial court on April 1, on the condition that he would not leave the country without permission and join the investigation whenever needed.

The ED, in its plea submitted in the High Court, challenged the trial court order, and said that protection to Vadra would be detrimental in carrying out a free investigation in the case.

The case relates to ownership of 1.9 million pounds of overseas assets by Vadra. It pertains to undisclosed foreign assets and entities meant to evade tax.

The ED told the High Court, that Vadra's questioning was required to unearth the entire source of credit used for the purchase of properties, ascertaining transactions and money laundering.

"Because it is trite to say that the anticipatory bail, to some extent, intrudes in the sphere of investigation of crime and that the courts must be cautious and circumspect in exercising such powers of discriminatory nature," the ED said in its plea.

"It is for the same reason that the relevant factors for grant of anticipatory bail are materially different from the grant of regular bail... The special judge has passed the impugned order by ignoring the material on record," it said.

The probe agency also said, that Vadra's questioning would help it ascertain the role of other key accused persons involved in the commission of offence and their modus operandi.

"Ascertaining the exact source of the tainted money and the end use of such funds involved in the case," the plea read and added: "Confronting him (Vadra) with the voluminous incriminating material for bringing the investigation to a logical conclusion."

The ED noted that there were chances that Vadra may tamper with evidence and influence witnesses in the case, as he was an influential person.

It said that in spite of being given several opportunities to come clean about his alleged role in the case, Vadra has remained evasive and has maliciously claimed himself to be a victim of political vendetta, and that he had made all possible attempts to sensationalize the case.