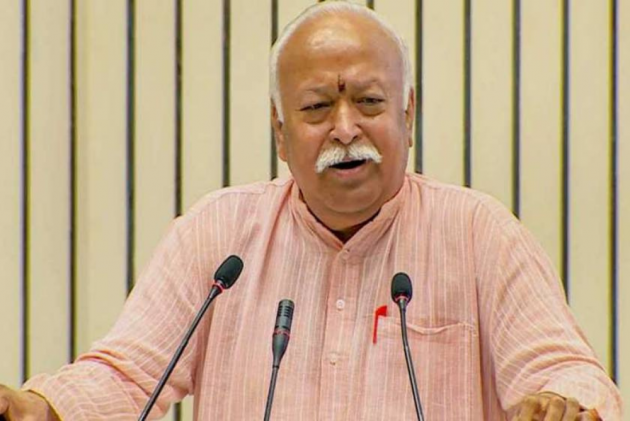 Expressing deep concern over the "severe demographic imbalances", RSS chief Mohan Bhagwat on Friday urged the government to reformulate the National Population Policy keeping in view the availability of resources in the country.

He said the policy should be reformulated in a way that it keeps future needs and the problem of demographic imbalance intact, while it should also apply the same uniformly to all.

Bhagwat called for curbing the illegal infiltration from across the borders and preparing the National Register of Citizens (NRC) to prevent the infiltrators from acquiring citizenship rights and purchasing lands in the country.

Speaking during his annual Vijayadashmi address to RSS workers at Reshimbagh in Maharashtra, Bhagwat also said the share of population of people belonging to religions of "Bharatiya origin" which was earlier 88 per cent, has come down to 83.8 per cent, while that of the Muslim population which was 9.8 per cent in the past has increased to 14.23 per cent between 1951 to 2011.

"Ours is a nation of youths having about 56 to 57 per cent young population, who will become old 30 years later and many hands would be needed to feed them. How many hands would needed to feed them?...All these aspects need to be contemplated. Similarly, whether our enviroment would be able to sustain this population and whether our mothers are capable and empowered needs to be contemplated," he said.

According to him, a resolution 'Challenge of imbalance in the population growth rate' passed by the(ABKM), the top policy making body of RSS, in Ranchi in 2015, had mentioned that the steps taken to control the population had yielded adequate results during the previous decade.

Bhagwat said that ABKM was of the opinion that severe demographic changes brought forth by the analysis of the religious data of Census 2011 highlighted the necessity of the review of population policy.

Citing the resolution, Bhagwat said vast differences in growth rates of different religious groups, infiltration and conversion resulting in religious imbalance of the population ratio, especially in border areas, may emerge as a threat to the unity, integrity and cultural identity of the country.

He further said that although India was one of the early countries in the world to announce in 1952 that it will take population planning measures, it was only in 2000 that a comprehensive population policy was formulated and a population commission was formed.

The policy aimed at achieving a stable but healthy population by 2045 by optimising the fertility rate to the ideal figure of 2.1 total fertility rate (TFR). It was expected that as this aim is in accordance with our national resources and expected future requirements, it will be uniformly applied to all sections of society, he said.

However, the National Fertility and Health Survey of 2005-06 and the 0-6 age group population percentage data of religion in Census 2011, both indicate that the TFR and child ratio is uneven across the religions, he said, adding, "This is reflected in the fact that the share of the population of religions of Bharatiya origin which was 88 per cent has come down to 83.8 per cent, while the Muslim population which was 9.8 percent has increased to 14.23 percent during the period 1951-2011."

In addition to that, the rate of growth of the Muslim population has been higher than the national average in the border districts of the border states, like Assam, West Bengal and Bihar, which clearly indicates unabated infiltration from Bangladesh, he said.

The report of the Supreme Court-appointed Upamanyu Hazarika Commission and several judicial pronouncements from time to time have corroborated these facts, he said.

"It is also a fact that infiltrators are usurping the rights of citizens of these states and are becoming a heavy burden on the already scant resources apart from creating socio-cultural, political and economic tensions," Bhagwat said.

Bhagwat also asked the countrymen, including the RSS volunteers to take cognisance of the 'causes' of these population changes and consider it their national duty to create 'public awareness' and take all lawful steps to save the country from this demographic imbalance.

He said that the violence that broke out following the elections in West Bengal and the "pitiable condition" of Hindu people there can also be attributed to the appeasement of barbarous elements by the government and population imbalance.

"Therefore, a policy that is applicable to all keeping in next 50 years should be initiated. All of us need to inculcate the habit of considering the collective national interest above everything while coming out of attractive cobweb of milking the parochial group interests," he said. (With PTI inputs)