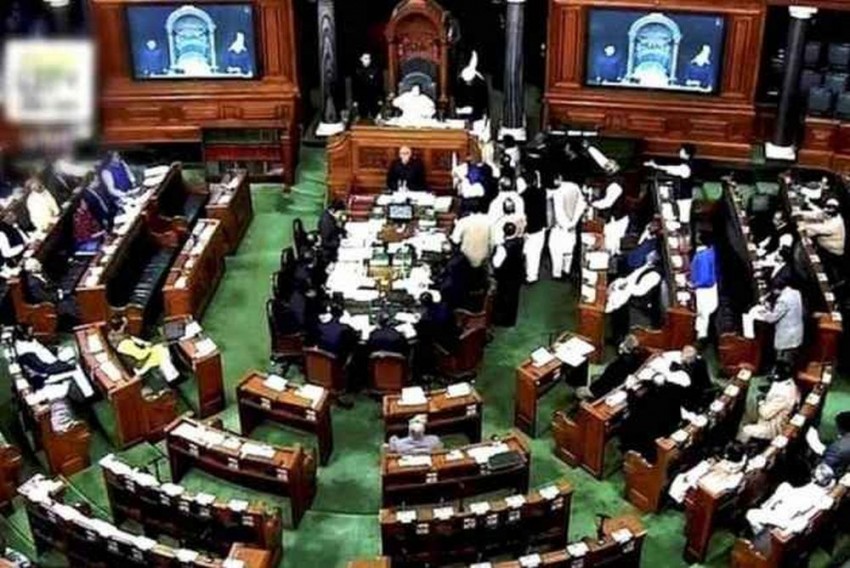 The Bihar assembly witnessed a ruckus on Saturday when the opposition sought to raise the issue of alleged involvement of revenue and land reforms minister Ram Surat Rai in illicit liquor trade, forcing adjournment of the House around noon till lunch.

When the proceedings began at 11 am, leader of the opposition Tejashwi Yadav rose from his seat and urged the Chair that an adjournment motion over Rai's alleged involvement in the business of liquor in this dry state be taken up for discussion.

Speaker Vijay Kumar Sinha disapproved of the same, saying he has received the notice but the motion shall be considered only at "an appropriate time".

He ruled that the Question Hour should proceed.

A miffed Tejashwi Yadav signalled to the MLAs of his party and allies Congress and the Left that it was time to leave the House and they staged a walkout even as health minister Mangal Pandey began reading out the reply to a short notice question by a RJD legislator.

By noon, when the Zero Hour began, the opposition legislators were back in the House. The Speaker rejected the adjournment motion moved by RJD MLA Rekha Devi.

She was, however, allowed to read out the motion after Yadav rose and made a request to the effect.

The RJD heir apparent, thereafter, added that he had some "evidence" against Rai which he wished to place before the House.

Rai has been in the eye of a storm over a four-month-old case. A large number of liquor cartons was seized from a school building in Muzaffarpur district in November last year, a fortnight before the BJP leader won the Aurai seat and landed a cabinet berth. The school is named after Rai's deceased father Arjun Rai.

Yadav has been alleging that he suspected the minister's involvement in illegal liquor trade, pointing out that he was named in the school's documents as its founder. Moreover, one of his brothers, the manager of the school, has been named as an accused in the FIR.

The minister has countered opposition charge saying his brother was "one of 13 people named in the FIR, the remaining being associated with the RJD", while insisting that complicity of those named as an accused was still under investigation.

Training his guns at Rai, Yadav, during the assembly session, also made a mention of the minister's deceased father. A strong exception was taken to this by Deputy Chief Minister Tarkishore Prasad.

The opposition legislators then trooped into the well and raised anti-government slogans, causing the Speaker to adjourn the proceedings around 12.15 pm.

Thereafter, they spent some time outside, squatting in front of the Speaker's chamber.

Later, Yadav led a march towards Raj Bhavan, barely a kilometre away, saying he would apprise Governor Phagu Chauhan of the attempts to "muzzle the voice of the opposition".

Earlier, Yadav had held a press conference at his residence where he displayed pictures of the inauguration of the school in which Rai could be seen.

"How can the minister wash his hands off a matter that involves a property and an institution wherein he is so deeply involved," Yadav asked, reiterating the demand that he be sacked by Chief Minister Nitish Kumar.