Union Minister Rajnath Singh said such leaders had no moral right to be members of the House. 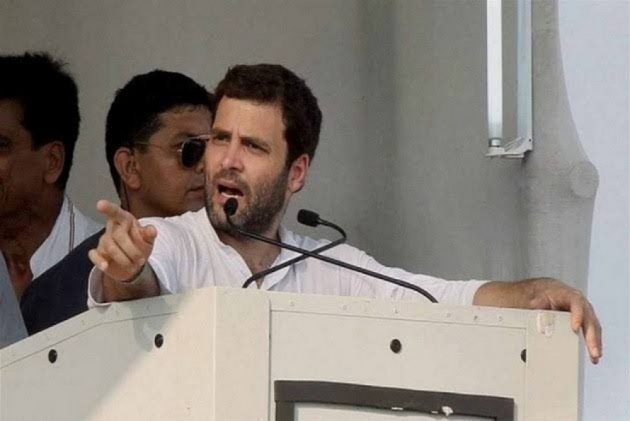 The BJP on Friday launched a scathing attack on Congress leader Rahul Gandhi in the Lok Sabha for his "rape in India" remark and sought his apology.

Minister of State for Parliamentary Affairs, Arjun Ram Meghwal, said several BJP members had given notices of adjournment in the Lok Sabha against Gandhi's remarks and they should be allowed to speak.

"Narendra Modi had said 'Make in India' but nowadays wherever you look, it is 'Rape in India'. In Uttar Pradesh, Narendra Modi's MLA raped a woman, then she met with an accident, but Narendra Modi did not utter a word," Gandhi said at a public rally in Jharkhand's Godda on Thursday.

Meghwal said Gandhi's remarks in Godda were condemnable and he should apologise in the House.

#WATCH Rahul Gandhi, Congress in Godda, Jharkhand: Narendra Modi had said 'Make in India' but nowadays wherever you look, it is 'Rape in India'. In Uttar Pradesh Narendra Modi's MLA raped a woman, then she met with an accident but Narendra Modi did not utter a word. (12.12.19) pic.twitter.com/WnXBz8BUBp

He added that there had been precedents where members have apologised in the Lok Sabha for remarks made outside the House.

Attacking the Wayanad MP, Union Minister Rajnath Singh said such leaders had no moral right to be members of the House.

Union Minister Smriti Irani said, "This is the first time in history that a leader from the Gandhi family is giving a public call that Indian women should be raped. Is this Rahul Gandhi's message to the people of the country? "

BJP MP Locket Chatterjee hit out at the Congress leader saying he had insulted women by making remarks that 'Make in India' had become "rape in India".

"The Congress party has raped the whole country," Chatterjee, an MP from West Bengal, said.

Responding to the BJP, Gandhi said he would not apologise.

"I have a clip on my phone in which Narendra Modi ji is calling Delhi a 'rape capital'. I will tweet it so that everyone can see. Just to deflect attention from protests in Northeast, this is being made an issue by BJP," he said.

DMK MP Kanimozhi defended Gandhi saying, "The PM said 'Make in India', which we respect, but what is happening in the country? That is what Rahul Gandhi intended to say. Unfortunately, Make in India is not happening and women in the country are being raped. This is a concern."

There was a commotion in the House as BJP members raised slogans seeking apology from Gandhi.

Lok Sabha and Rajya Sabha was adjourned till 12 pm after the uproar over Gandhi's comments.