What Now? Rumblings Within People’s Alliance On Road Map After J-K Council Polls 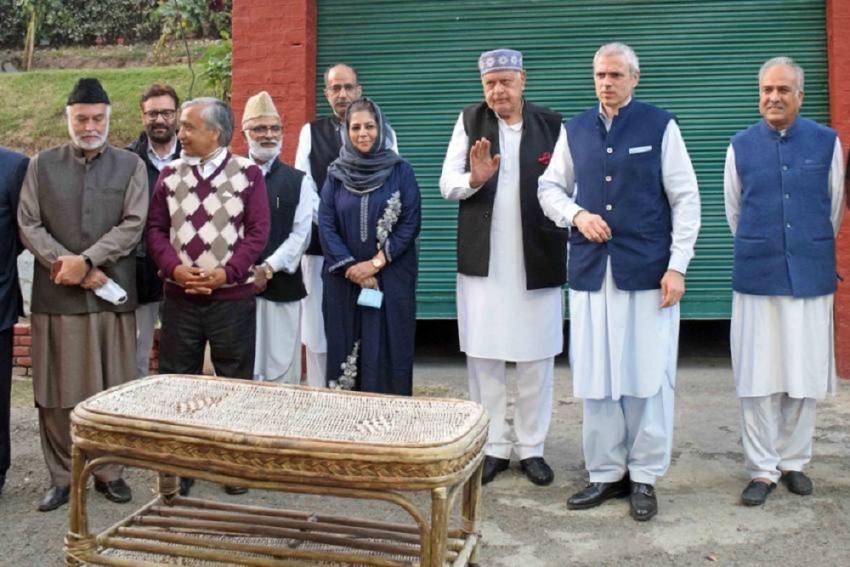 With the National Conference (NC) emerging in a commanding position after the recent District Development Council (DDC) polls in Jammu and Kashmir, questions regarding the future course of action of Peoples Alliance for Gupkar Declaration (PAGD) have started gathering steam within the NC.

Senior NC leader and former law and justice minister Basharat Bukhari said the NC could have done better without an alliance in the DDC polls. The PAGD won 112 of a total of 280 seats in the DDC elections, which were held in eight phases from November 28 to December 19.

The PAGD is all set to control the majority of the districts in Jammu and Kashmir.

Bukhari said the alliance must share a future roadmap. “The alliance by winning the DDC polls has made it clear that abrogation of Article 370 and other decisions taken on August 5, 2019, and after have been rejected by the people,” Bukhari told Outlook. He said the alliance has lived its purpose and now it should specify future goals."

At the same time Bukhari, who was a minister in the Mehbooba Mufti-led PDP-BJP government, justified the alliance between PDP and BJP in 2015 and said the former chief minister Mufti Muhammad Sayeed entered into an alliance with the BJP at that time as he saw a ray of hope in the leadership of Prime Minister Narendra Modi to resolve the Kashmir issue.

He, however, said the BJP failed the people of Jammu and Kashmir during its alliance with the PDP and also after PDP’s withdrawal from the alliance. He says the party did nothing to reach out to the people.

He also said regional political parties have not been sincere towards their political objectives. He said when they are in power they don’t talk about autonomy and self-rule but when they are out of power they raise these issues. He said there should be consistency among the parties about political issues as they have larger ramifications. He asserted that once the PAGD would come up with a future programme for the alliance it would clear confusion among the people.

The alliance fought the DDC polls jointly and won in almost 13 out of 20 districts of Jammu. "My question is the Alliance has fought together DDC polls and conveyed a message to all. But what now after the DDC polls?" Bukhari asked.

However, the National Conference dismissed Bukhari’s statement and said that he should avoid bigger issues.  The NC sources say Bukhari couldn’t save his own two seats in the DDC polls and because of him, the NC had to surrender four seats in the DDC polls as he insisted to field his candidates. The party sources say he has no locus standi to talk on PAGD and called him a small-time politician, who should better focus on his constituency.

The Gupkar declaration is a resolution that was passed by the National Conference, People’s Democratic Party, Congress, People’s Conference, and smaller parties, including Awami Ittihad Party (AIP) of Engineer Rashid, Jammu and Kashmir Peoples Movement of Shah Faesal, and some smaller parties on August 4, 2019, to defend J&K’s special status. A day later, on August 5, 2019, the BJP government revoked Article 370 amid arrests of around 8,000 people, including three former chief ministers and enforced a security and communication lockdown.

In October 2019, Gupkar signatories formed an alliance at Farooq Abdullah's residence called Political Alliance for Gupkar Declaration. The alliance said it will fight for the restoration of Article 370 and resolution of the Kashmir dispute.

Last year on August 22, despite the crackdown, the signatories of the resolution surprised the government by issuing a joint statement describing the abrogation of Article 370 as grossly unconstitutional and a challenge to the basic identity of the people of Jammu and Kashmir.