BJP state president Satish Poonia said that Ashok Gehlot-led Congress government in Rajasthan has lost the confidence of the people and it was time for its departure. 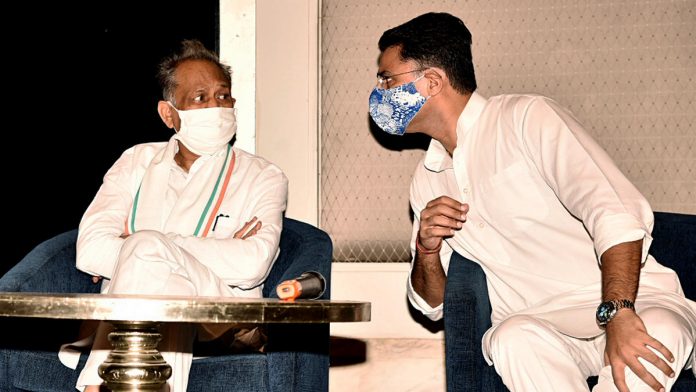 As the ruling Congress in Rajasthan grapples with a rebellion led by Sachin Pilot, the BJP on Tuesday demanded that Chief Minister Ashok Gehlot take a floor test to prove his government's majority in the Assembly.

(Catch all the live updates on Rajasthan political crisis here.)

The party also alleged that the residences of MLAs were being kept under police surveillance and the legislators of Bhartiya Tribal Party (BTP) "had been threatened".

'Truth Can Be Harassed, Not Defeated': Sachin Pilot After Being Sacked As Rajasthan Deputy CM

The BTP, which has two MLAs in the Rajasthan assembly, has asked its legislators to remain neutral. It was earlier supporting the Gehlot government.

“Prove the majority in a floor test first and then go for a cabinet reshuffle. The result of the political fight is out,” Leader of Opposition Gulab Chand Kataria told reporters.

Deputy Leader of Opposition Rajendra Rathore claimed that Ashok Gehlot government will not be able to prove its majority in a floor test.

BJP state president Satish Poonia said that the state government has lost the confidence of the people and it was time for its departure.

“The government has failed to deliver on its promises and failed to perform. We are keeping a watch on the situation and will follow the direction of the party leadership,” he said.

The party held a meeting of senior leaders to discuss the situation. Nagaur MP Hanuman Beniwal and convenor of Rashtriya Loktantrik Party, which is BJP's ally, was also present.

The crisis in Rajasthan Congress reached a tipping point on Tuesday as the party announced the sacking of Pilot as deputy chief minister and president of its state unit. Two of his loyalists were also removed as ministers.

Some of the MLAs belonging to the Sachin Pilot camp too have demanded a floor test, while contesting the rival Gehlot camp's claim of having the support of 109 legislators in the 200-member House.

In the run-up to the Congress Legislature Party meeting in Jaipur on Tuesday, Pilot loyalist Ramesh Meena said, "A floor test should be conducted in the assembly. This will expose the claim that the Ashok Gehlot government has the support of 109 MLAs."