A day after a man was alleged of sacrilege for defiling the sanctum sanctorum of the Golden Temple and killed, the temple management claims sacrilege incidents are on rise and requires stringent action. 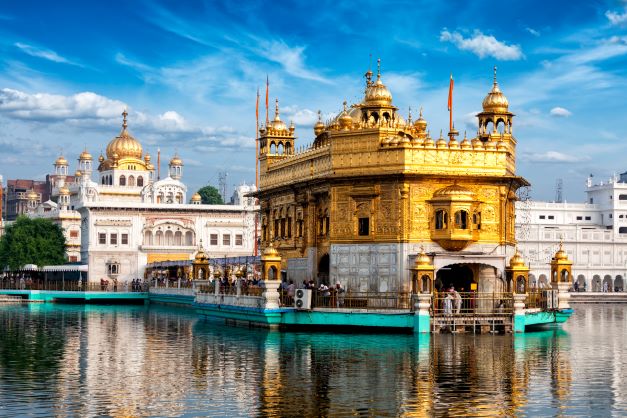 A man was beaten to death after he allegedly attempted to commit "sacrilege" inside the sanctum sanctorum of the Golden Temple in Amritsar on Saturday evening. The man hailed from Uttar Pradesh and was seen in a video, jumping inside a fence, to reach the Guru Granth Sahib in the Golden Temple.

The incident took place during the evening prayers (Rehraas Sahib). The man jumped from the golden railing inside the sanctum sanctorum, picked a sword and reached near the place where a Sikh priest was reciting the holy Guru Granth Sahib. The man was caught by Shiromani Gurdwara Parbandhak Committee (SGPC) task force members.

In conversation with Outlook, Harjinder Singh Dhami, President of Shiromani Gurdwara Parbandhak Committee (who are in charge of themnagement of the Golden Temple)  gives us insight into what happened and how at the Golden Temple on Saturday night.

What does 'beadbi' or 'sacrilege' of Guru Granth Sahib Ji mean?

How can a person attempt sacrilege in Golden Temple despite such high security?

Golden Temple is one of the five takhts of Sikhism and a major tourist spot, each day lakhs of people come to visit the holy shrine. Like other days, yesterday too the shrine was fully secured but the accused didn’t come with any weapon. For us, he was part of the Sangat but he had malicious intent and no one we can smell that. He attempted to harm when the evening prayers were going on and everyone during this time are devoted in prayers, their guards were down. He jumped from the railing went for Shri Sahib (sword) and before he could take out the sword our guards took hold of him. This all was recorded on CCTV cameras and since the evening prayers are live telecast on a private channel, this incident was seen by everyone.

But why did the public kill the accused in place of simply handing him over to the police?

How can you justify taking the law and order into your own hands?

I cannot justify the incident but we have to pay attention that over 300 cases of sacrilege have been reported in the past six years and the police have tried to investigate it but due to lack of evidence the charges were often dropped and when a person is charged with blasphemy, he/she can be booked only under section 295A of Indian Penal Code, which doesn’t offer strict punishment as blasphemy can vary person to person but sacrilege is the biggest sin in Sikhism. Three days back, a person was accused of ‘beadbi’ of Shri Gutka Sahib, we handed him over to the police... he’s in police remand. We trust the law and order but here in Golden Temple, the situation became volatile as it was done during the Rehraas sahib and there were thousands of angry pilgrims.

How do you think the government can help in this situation?

First of all, the government can help us identify the culprit by DNA testing so that we can investigate why he tried to hurt our religious sentiments. Second, we need strict punishment for sacrilege. There are over 300 cases and it is high time we addressed this issue because this is not just any crime...sacrilege is sin.

So, I demand that the government should introduce life imprisonment for sacrilege.