SAD Demands Punjab To Be Declared As ‘Principal Market Yard’ 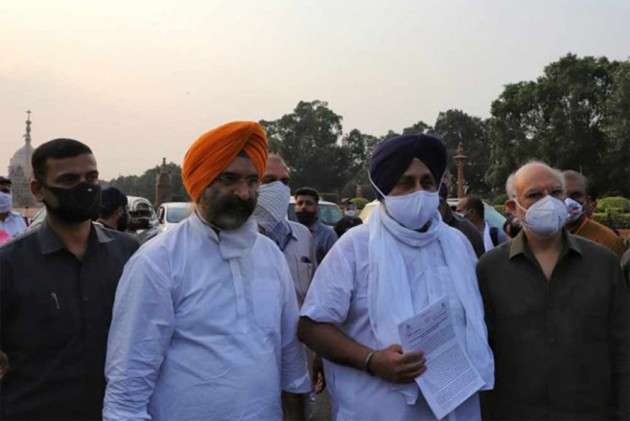 “This is the best, the quickest and the most effective way for Punjab to be exempted from the recently passed anti-farmer legislations because they do not apply to principal market yards declared by any state government. Therefore, the Punjab government must act without delay,” Badal said in a strongly worded statement. This will ensure that private players who enter the market will have to compete under the same set of laws as applicable to state procurement agencies, Badal added.

Badal's proposal comes after his party urged the President not to sign the three agricultural legislations passed by Parliament. The President’s response is still awaited but the SAD wants to pre-empt the application of the provisions of these legislations before they come into force. “We want Captain Amarinder Singh to immediately take action to avoid the likelihood of any technical or legal hitches once the legislations come into force. There’s no time to waste,” the Akali Dal supremo said.

He also declared that his party is willing to go to any length to ensure that these legislations are not applied in Punjab. He also claimed that if the Punjab Chief Minister does not heed his advice, then he would be responsible for the exploitation of the farmers in the state by corporates.

The Akali Dal president also asked the Chief Minister to rescind the amendments which was brought into the state Agricultural Produce Market Committee (APMC) Act. These amendments have provisions which are identical to the recently passed legislations he claimed. "This is a strange situation. The chief minister first implemented similar amendments in Punjab, but now he claims to oppose the legislations passed by Parliament. The Congress government in the state needs to come clean on its contradicting stance and the state government should revoke its APMC amendments,” Badal added.