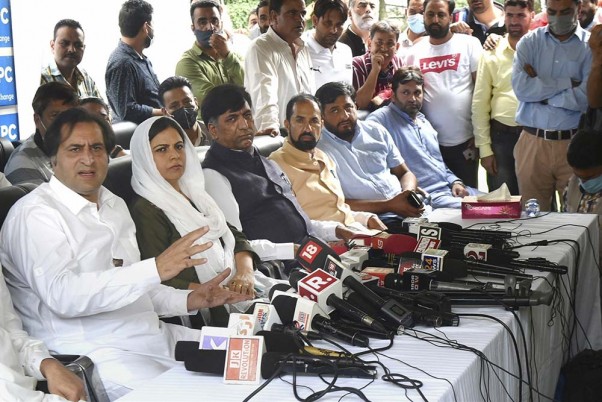 Calling All Parties Meeting convened by the Prime Minister with J&K leaders on June 24 in New Delhi a social and political interaction and an exchange of ideas, Peoples Conference chairman Sajad Lone today said he had no delusions about the meeting. “What happened there was social interaction, political interaction and an exchange of ideas and I personally didn’t expect anything from the meeting. I don’t think I had a feeling I will come out from there (the meeting) with something,” Lone said addressing a press conference in Srinagar.

Asked about the recent statement of Peoples Alliance for Gupkar Declaration that showed disappointment over the June 24 meeting with the Prime Minister, Lone said he doesn’t hold it against the PAGD as they expected something and they believe it is not unfolding. “I had a feeling its scope will be limited. I just hope they follow it up after a month or two or three or four. Need of the hour is there shouldn’t be any communication gap (between the centre and J&K leaders). It is very important that there should be no communication gap and engagement goes on.”

The PAGD on Tuesday held its first convention with functionaries and workers of its constituent parties, which passed a resolution seeking restoration of Jammu and Kashmir’s constitutional position that existed on August 4, 2019. The meeting also expressed disappointment with June 24 meeting as the centre, according to them, didn’t announce any confidence-building measure since then.

People Running Out Of Patience In J&K: Mehbooba Mufti

“One thing I want to say Kashmiri society, Kashmir polity, our mainstream (parties), we are on the back foot but history is the witness of it that no community remains on the back foot forever. Our time will come and it will come soon,” he said.

He said political leadership of J&K has a challenge that it cannot afford to act in a manner that causes hardships to people. He said the biggest skill of leadership is to save youths and save a community they represent. He said leadership must show patience as it is a long game. “Nothing started on August 5 and nothing ended on August 5. Things will go on and politics will go on,” he said. He said there is anger among people against political parties, against the revocation of Article 370 and this simmering anger is dangerous. He said at the same time it is the responsibility of the leadership to save people.

Asked how he expects people who are leaving other parties especially the Peoples’ Democratic Party and joining the Peoples Conference after August 5, 2019, will be loyal to him as they weren’t loyal to others, Lone said judgments shouldn’t be passed on loyalty and disloyalty. “There are no holy cows in Kashmir. Neither from the political side nor from the media side. A journalist working with one news channel today joins another tomorrow and it doesn’t make him debauch.”