Sam Pitroda's remarks on 1984 anti-Sikh riots reflect the 'arrogance' of the Congress, PM Narendra Modi said addressing a poll rally on the last day of campaigning for the sixth phase of Lok Sabha elections in Rohtak. 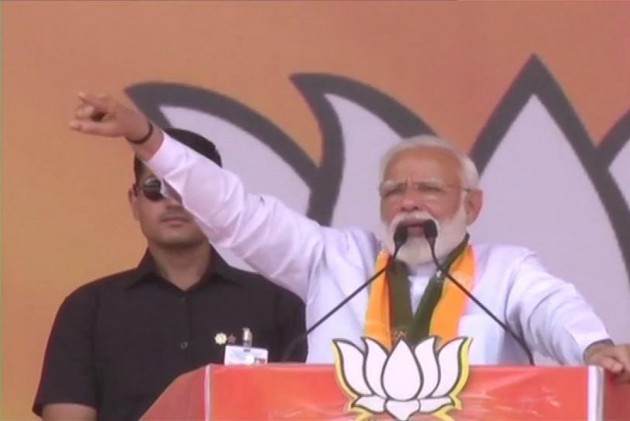 Attacking the Congress over its leader Sam Pitroda's reported remark on the anti-Sikh riots, Prime Minister Narendra Modi said it showed the "character and mentality" of the party.

The remarks reflect the "arrogance" of the Congress, Modi said addressing a poll rally on the last day of campaigning for the sixth phase in Rohtak.

Modi said, "Congress, which ruled for a maximum period, has been insensitive and that is reflected by the three words spoken yesterday...these words have not been spoken just like that, these words are character and mentality and intentions of the Congress”.

“And which were these words, these were 'hua to hua',” said Modi referring to Pitroda's remarks made on Thursday on anti-Sikh riots of 84.

“Hua to hua,” repeated Modi and told the gathering that they must be wondering what the Prime Minister was saying.

“We can very well understand arrogance of those who run the Congress in these three words—Hua to Hua,” said Modi.

"Yesterday, one of the tallest leaders of the Congress speaking in a loud voice on 1984 said '84 ka danga hua to hua'. Do you know who this leader is, he is very close to the Gandhi family...this leader was very good friend of Rajiv Gandhi and Guru of Congress 'naamdar' (dynast) president,” he said.

#WATCH PM Modi in Rohtak, Haryana on Congress' Sam Pitroda's remark on 1984 riots: 'Hua so hua'-3 words that sum up Congress's arrogance were uttered y'day by one of its most senior leaders, he said this on anti-Sikh riots. They have no value for human life pic.twitter.com/HWhj7CVzhy

Asked about the 1984 riots, Pitroda had reportedly said  the discussion should be on the issues of this elections and Modi's performance and remarked: "84 mein hua to hua."