In the fourth part of 'Sands Of Time', film writer Amborish Roychoudhury looks at Bollywood's early obsession with superhero films and Superman. 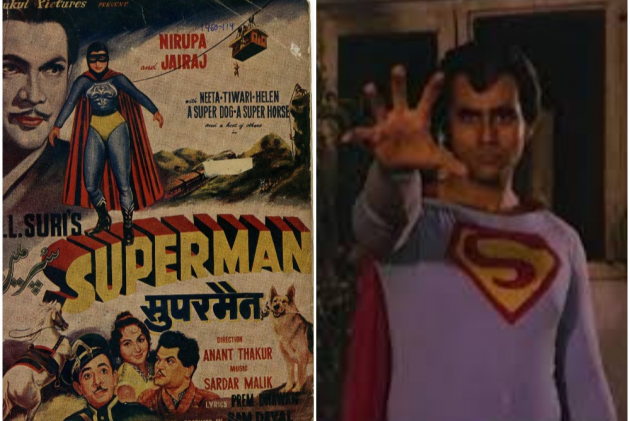 The following article is part of a series called 'Sands of Time by Outlook India in which Amborish Roychoudhury, writer and national film award winner, takes us on a journey back in time to the early years of Indian cinema. This series will look at the forgotten superstars of silent cinema, the story of Master Vithal - India’s Douglas Fairbanks, the wild days of Amitabh in Kolkata before he came to Bombay, how Dilip Kumar left Saira Banu for another woman in a momentary lapse of judgement, or how Shah Rukh Khan featured in a Dostoevsky adaptation in a Mani Kaul film, and much more.

In Sands Of Time - Part 4, Roychoudhury looks at Bollywood's early obsession with superhero films and Superman.

Superman was originally a bald madman bent on world domination via telepathy. That was what Joe Shuster and Jerry Siegel conceived: a supervillain, not a hero. It was much later that the idea of the famous alien in blue tights took flight in their imagination. It was the era of myth-making, and much of the stories that will shape the world for a better part of the next century were being conceived.

Joe and Jerry’s hero made the cover of Action Comics, issue #1, and the frenzy that followed was unparalleled in publication history.

That was 1938. In all of 22 years, Superman spawned two Bollywood adaptations. One of them was Anant Thakur’s bizarre Superman (1960), where the titular role was played by Nirupa Roy, with Jairaj starring opposite her. Almost nothing is known about the film, the only remnants are a poster which shows Nirupa dressed in a Superman-meets-The Phantom costume, and publicity still of Roy in costume, just about to toss a knife. But the other film desi Superman film released that year can still be found on YouTube in all its black & white glory. And surprise, Jairaj was playing the lead again. But this time he WAS the superhero. 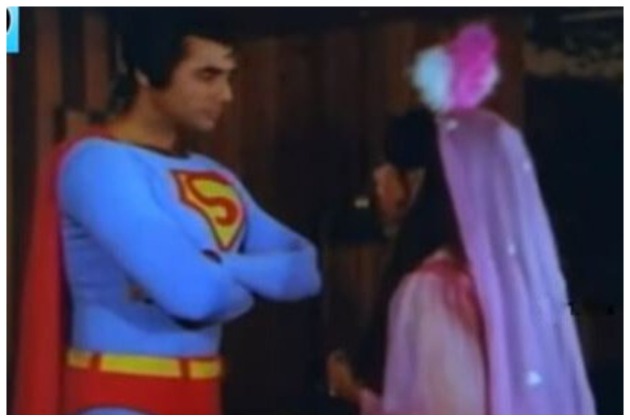 For some strange reason, the film was called Return of Mr Superman. There was nothing to return to. It wasn’t a sequel, and nor was there a backstory that necessitated a return. But I digress. Let’s stay on Jairaj. Paidi Jairaj or P. Jairaj as he was sometimes credited, was Hindi cinema’s original strongman hero. He played brawny action heroes when Sunny Deol was a remote possibility and his father Dharmendra was a happy kid playing in the fields of Sahnewal in undivided Punjab. Most of the films he was doing had him as a swashbuckling adventurer or a mythological prince. Perhaps this reputation got him to play a superhero here.

Farmer Ram Dayal discovers an infant in an abandoned spaceship, which was, of course, rather commonplace in Indian forests and gardens back in the 1960s. Ram Dayal adopts the baby, only to realise that the kid had superpowers, which he uses as a force for the good…the boy, Jaykumar, grows up to be a journalist for Azad Desh. A la Clark Kent, Jaykumar pursued crime as a reporter and fought it as Superman. The most notable thing about this whole affair is the costume - imagine a grotesque headgear resembling a gas mask, and a cape wrapped over a black sweater! 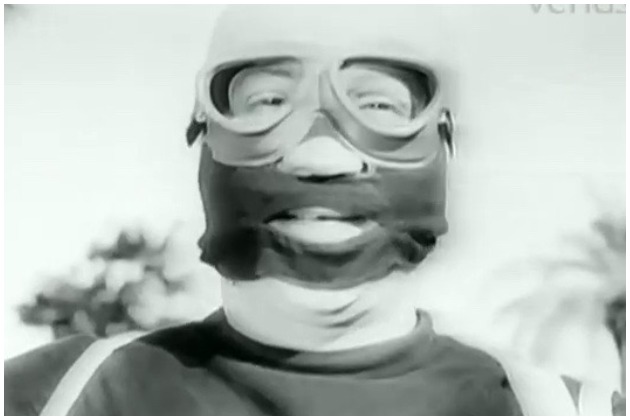 In a manner of speaking, Superman and Return of Mr Superman (both 1960) were the earliest mainstream feature adaptations. Back in Hollywood, there were a few movie serials in the ‘40s and ’50s, and a low-budget outing called Superman and the Mole Men (1951). The first time Supes got a proper big-screen treatment was Richard Donner’s classic Superman (1978). A number of sequels followed, including the insipid Superman III (1983) and Superman IV: The Quest for Peace (1987), both of which tanked spectacularly. When this last instalment came out, an Indian producer-director decided to give The Man of Tomorrow another chance in Bollywood.

B. Gupta made his name handling special effects in Hindi films like Aas ka Panchhi (1961), Half Ticket (1962), Shikari (1963) and the venerated Jaani Dushman (1978), even Akshay Kumar’s Khiladi (1992). When he saw Richard Donner’s film, Gupta was stirred to make a version of his own, with all the special effects trickery he had learnt all his life. Those were the days Hollywood films took a few years before they were released in India, so he must have stumbled on to Donner’s film in the early 80s. At around the same time, a strapping young man was itching make his mark in Hindi filmdom. His father, Sudesh Issar, assisted the legendary Raj Khosla in iconic films like Woh Kaun Thi (1964), Mera Saaya (1966) and Mera Gaon Mera Desh (1971), and went on to direct Prem Geet (1981), which will go down in history as the film that unleashed Jagjit Singh into the world. His son Puneet trained as an actor at Kishore Namit Kapoor’s Acting Institute. His first big assignment would land him in a world of trouble, and the events he unwittingly set in motion would send shockwaves through the nation.

On Monday, July 26th, 1982, Puneet Issar was shooting with Amitabh Bachchan in Bangalore. They were in an action scene together, and Puneet was determined to leave a mark. He was to land a punch in the superstar’s gut, and Big B was to whirl around on impact and hit a table. That was the scene. But the boy was nervous, and Bachchan kept egging him on to make it look as real as possible. Puneet, stimulated by the encouragement, summoned all his strength and took a swing at The Star of the Millennium. Bachchan swirled and his abdomen hit the table with so much force that it ruptured his spleen. He was rushed to the hospital where for the next few days Amitabh Bachchan would fight a battle for survival, and the whole nation was prostrating before every god they knew so that their hero would get a new lease of life. Puneet Issar was guilt-ridden and anxious, but once Bachchan was out of danger and able to speak, one of the first things he did was reassure him and stood on the balcony of the hospital with his arms around Puneet, sending out signals that the boy was not responsible for what happened at all.

Coolie released on November 14, 1983, and became a runaway success. Puneet Issar was getting offers by the handful. The next film had him in the lead, a cult horror by the name of Purana Mandir (1984), but the role that was going to define him to at least two generations, was Duryodhan in B.R. Chopra’s TV serial Mahabharat (1988). Sometime between these two projects when Issar was still getting signing films as a hero, he was seen in a B-film adaptation of Superman.

B. Gupta’s film Superman (1987) lifted footage wholesale from Richard Donner’s film. It starts with washed-out footage of Krypton from the 1978 movie playing out in the credits. Dharmendra plays the Bollywood Jor-El, called Zenko. Zenko, a scientist on a distant planet, warns everyone that unless they took protective measures, “mom ki tarha pighalkar yeh planet saari kaynaat par phail jaayega”. They (led by veteran character actor Murad) refuse to listen to him, and Zenko and his wife (Ranjeeta) ship their infant son off to Dharti.

The childless Captain Sahab and his wife (Ashok Kumar and Urmila Bhatt) discover the baby and raise him like their own. They call him Shekhar, and seem to be rather amused by the fact that he displayed “super strength” by twisting a garden hose. Shekhar, all grown up, overhears his father saying he is adopted. Captain Sahab sees Shekhar brooding and is filled with remorse, immediately performing the dil-ka-daura death scene. Shekhar leaves home, with an heirloom from his real father Zenko, a pencil torch. En route, he flings the torch in frustration, and out pops the disembodied voice of his father, accompanied by a hologram of Dharam Paaji.

And thus Shekhar turns into Superman. There’s no mistaking. It’s the same costume, sans any attempt to hide or change it for silly reasons like copyright. But when he flies, he magically transforms into Christopher Reeve - as B Gupta masterfully weaves in shots from the 1978 Hollywood spectacle. Shakti Kapoor plays a Bollywood Lex Luthor, who quips, and I quote, “Jin purani kitabon ko padhkar Superman ne taaqat haasil ki hai, un kitabon ke andar usska tod bhi zaroor hoga…aur main woh tod haasil karke rahunga. I shall kill him!”

Superman (1987) is an absolute delight to watch, a gift that keeps on giving. It can be found on YouTube.