The Ram temple movement in the past had assumed such a shape that virtually the entire country was linked to it, Maurya said, adding that it is wrong to see the issue through the Hindu-Muslim prism. 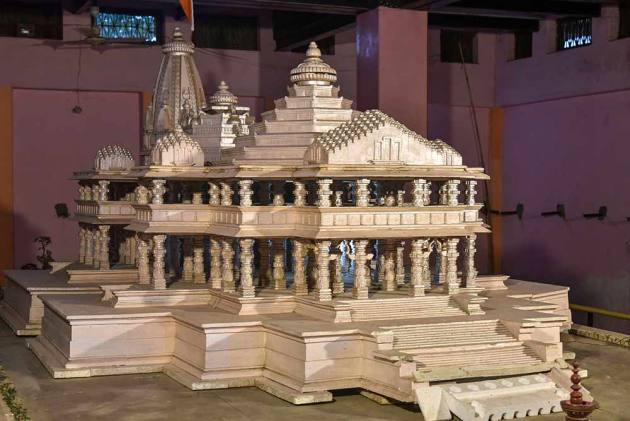 Uttar Pradesh Deputy Chief Minister Keshav Prasad Maurya on Tuesday said that "Ram, Rashtra and Roti" are complementary to each other and asserted that the Lord Ram temple here will symbolise and strengthen "national unity".

He spoke to PTI in an interview a day before the "bhoomipujan" for the Ram temple here.

"I am of the view that Ram, Rashtra (nation) and Roti (food) are complementary to each other. The temple which is going to be built at Ram Janmabhoomi marks the culmination of a nearly 500 year old battle in which a countless number of Ram bhakts attained martyrdom," Maurya said.

The Ram temple movement in the past had assumed such a shape that virtually the entire country was linked to it, he said, adding that when someone sees the issue through the Hindu-Muslim prism, he tells them that it should not be seen from this point of view.

"After fighting the British, we got Independence on August 15, 1947. In the same way, I feel that November 9, 2019, is equally important as it is when the Supreme Court, through its judgement, paved the way for construction of Ram temple in Ayodhya.

"But, now August 5 has become even more important, because from this day the work of building a grand temple for Lord Ram will commence," Maurya said.

Asked whether he considers the Ram temple movement at par with the freedom struggle, he parried a direct reply and said, "A grand temple for Ram Lalla is going to be built, and it will be a strong temple for the country which will symbolise national unity. This will strengthen national unity, and divisive forces will be isolated."

On leaders of opposition parties attacking the BJP on going ahead with the "bhoomipujan" on August 5, Maurya said, "There are a number of leaders who are giving unsolicited advice. These people are pained and peeved over the process of construction of Ram temple.

He also said that things are moving as per the wish of Lord Ram, and no one should try to create any roadblock nor try to give any advice.

Maurya's statement assumes importance in the backdrop of CPI MP Binoy Viswam's letter to Union minister Prakash Javadekar, opposing the telecast of the foundation stone-laying ceremony for the temple on Doordarshan as it would be "contrary to the accepted norms of national integrity".

Maharashtra Chief Minister Uddhav Thackeray too had said the ceremony can be conducted through video-conference in the wake of the COVID-19 pandemic.

"An e-bhoomi pujan can be done. The ground-breaking ceremony can be held through video-conference. This is an event of joy, and lakhs of people would be interested in attending the ceremony. Will we allow the spread of coronavirus?" Thackeray had said.

"Eradication of COVID-19 is the priority of the Maharashtra government, but some people think constructing a temple will help in its mitigation," Pawar had told reporters.