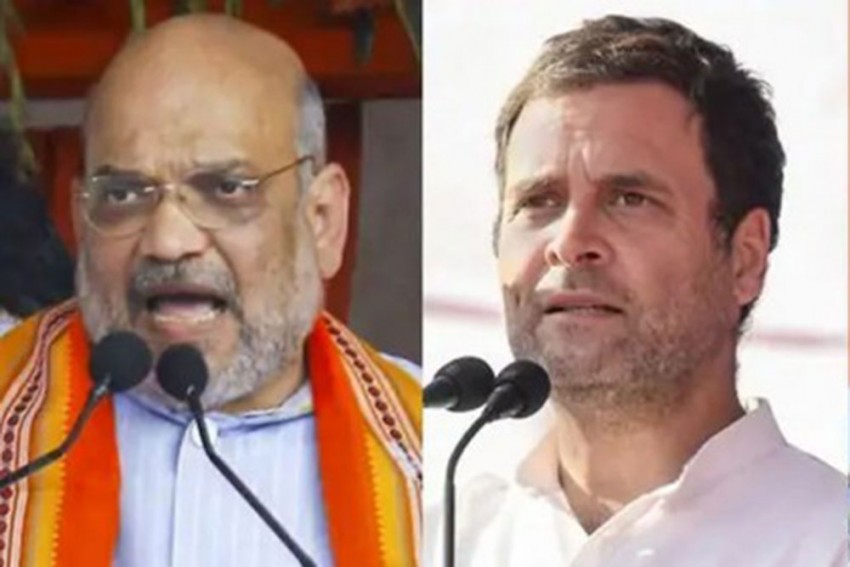 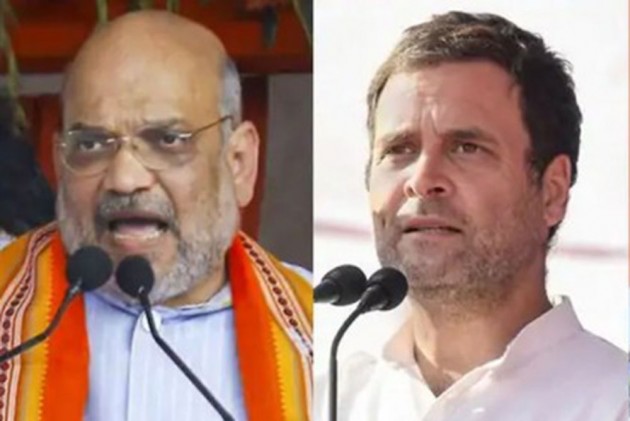 A full-scale verbal duel broke out between the BJP and the Congress on Thursday over the Supreme Court's verdict in the Rafale case.

While Union Home Minister Amit Shah hailed the ruling as "victory of truth" and demanded an apology from opposition leader Rahul Gandhi.

Gandhi, in turn, sought a Joint Parliamentary Committee (JCP) to be set up to probe into the multi-billion aircraft deal, saying Justice K M Joseph has left open a "huge door" for investigation.

Soon after the top court dismissed pleas seeking a review of its earlier order which had quashed demand for a probe in the fighter aircraft deal, the BJP fielded its top ministers and party leaders to launch an all-out attack on the Congress and Rahul Gandhi, evoking a sharp reaction from the opposition party, which claimed that the judgment is not a clean chit for the government.

The Congress had used Modi government's purchase of 36 Rafale jets from French aerospace major Dassault Aviation for the IAF at a cost of Rs 59,000 crore as one of the major issues in the 2019 Lok Sabha polls, combining it with its 'ChowkidaarChorHai' slogan.

While Shah asserted that the decision is a befitting reply to those leaders and parties who rely on "malicious and baseless campaigns", BJP working president J P Nadda said Gandhi tried to "mislead the nation from road to Parliament". Law Minister Ravi Shankar Prasad questioned if he raised the issue at the behest of the French firm's rivals.

In Tawang in Arunachal Pradesh, Defence Minister Rajnath Singh said the allegations of corruption in the Rafale deal were aimed at maligning Modi's image of a clean and honest leader and demanded an apology from the Congress.

In a series of tweets, Shah also said the ruling reaffirms Modi government's credentials as a dispensation that is transparent and corruption-free.

Supreme Court’s decision to dismiss the review petition on #Rafale is a befitting reply to those leaders and parties who rely on malicious and baseless campaigns.

Today’s decision, yet again, reaffirms Modi sarkar’s credentials as a govt which is transparent and corruption free.

"After today's rebuke from the SC, Congress and its leader, for whom politics is above national interest, must apologise to the nation," Shah said in a swipe at Gandhi.

Now, it has been proved that disruption of Parliament over #Rafale was a sham. The time could have been better utilised for the welfare of people.

After today's rebuke from SC, Congress and its leader, for whom politics is above national interest must apologise to the nation.

Addressing a press conference, Prasad noted that the court let off Gandhi because he had apologised to it for wrongly attributing some strongly-worded criticism of Prime Minister Modi, and asked if the Congress leader does not owe a similar apology to the nation for misleading people.

Countering BJP narrative, Gandhi, using hashtag "BJPLiesOnRafale", tweeted,Justice Joseph of the Supreme Court has opened a huge door into investigation of the RAFALE scam. An investigation must now begin in full earnest. A Joint Parliamentary Committee (JPC) must also be set up to probe this scam."

Congress chief spokesperson Randeep Surjewala claimed that the Supreme Court judgment has paved way for a comprehensive criminal investigation into Rafale "scam" but the BJP government was "misleading" the country on the impact of the verdict.

The judgment is not a clean chit, but paves way for full investigation, he said, and asked the government if it had the courage to order an independent probe.

Surjewala said the answer cannot be found through a court judgment but through a detailed fact-finding investigation by the JPC.

"Rather than indulging in celebrations, BJP Government should agree to a JPC investigation. Otherwise, it will be proved beyond doubt that the BJP Government is not 'corruption free and actually wants to remain 'investigation free'," he told reporters.

Congress sources also said the party may raise the issue during the Parliament session in consonance with other like-minded parties.

"We find the review petitions are without any merit," said a bench comprising Chief Justice Ranjan Gogoi and Justices S K Kaul and K M Joseph.

Congress leader Javeer Shergill said it has become clear that the judgment of the court in Rafale case would not stand 'in the way of' the investigating agency and taking action.

"As expected and as usual, the BJP Government and its ministers are misleading the nation on the impact of the judgment. The Supreme Court judgment is not a 'clean chit' but paves the way for ‘full investigation’. The layers of corruption in the Rafale Scam can be answered only through a fact-finding impartial JPC investigation," Shergill said.

With the Congress insisting on a high-level probe into the deal after the court's order, the law minister said it was really "shameless" of the opposition party to continue to push for an investigation despite losing the battle in courts as well as in elections.

Earlier, the apex court also closed the contempt plea against Gandhi for wrongly attributing to it his "chowkidar chor hai" against Modi, saying the remarks made by Gandhi were far from true and he should have refrained from those and could have been careful.