The Supreme Court had in November 2009 issued contempt notices to Prashant Bhushan and Tarun Tejpal for allegedly casting aspersions on some sitting and former top court judges in an interview to 'Tehelka'. 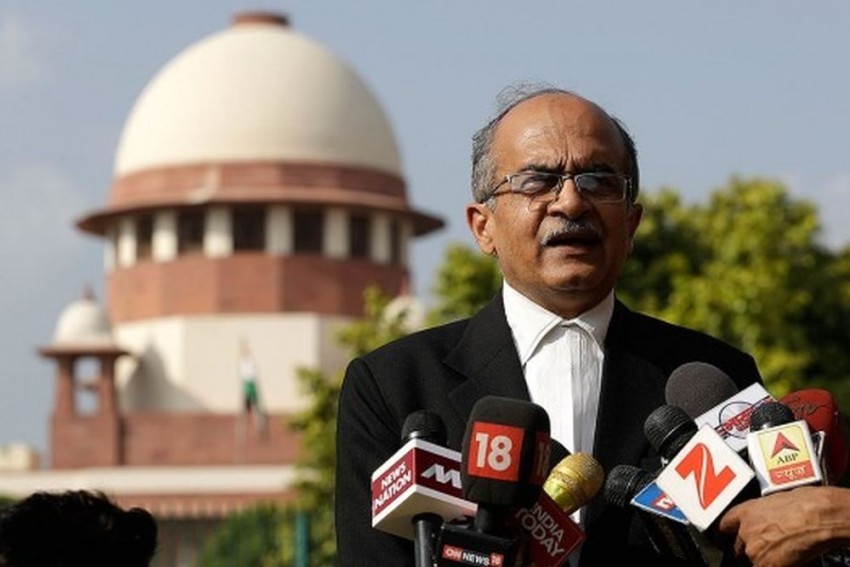 The Supreme Court Thursday accepted the plea of activist lawyer Prashant Bhushan to seek assistance of Attorney General K K Venugopal in a 2009 contempt case against the advocate and journalist Tarun Tejpal.

The apex court had in November 2009 issued contempt notices to Bhushan and Tejpal for allegedly casting aspersions on some sitting and former top court judges in an interview to news magazine 'Tehelka'. Tejpal was the editor of the magazine.

The matter came up for hearing through video-conferencing before a bench of Justices A M Khanwilkar, Dinesh Maheshwari and Sanjiv Khanna.

Senior advocate Rajeev Dhavan, appearing for Bhushan, said that larger questions of law would be dealt with in the matter and assistance of Attorney General was required to be taken.

“We want the Attorney General to assist this court in dealing with the questions given by us and the court had also framed some questions,” Dhavan said, adding that they had given some questions for consideration in the matter.

The bench directed that entire records of the matter be served to the office of the Attorney General and posted the matter for hearing on October 12.

On August 31, the apex court had imposed a “nominal fine” of Re 1 on Bhushan, who was convicted for criminal contempt in a separate case for his two tweets against the judiciary, saying he has attempted to “denigrate the reputation of the institution of administration of justice”.

In the 2009 contempt case, the top court had on August 25 decided to refer the matter to another bench to deal with certain larger questions related to freedom of speech and levelling of corruption charges against the judiciary.

Dhavan had told the court that 10 questions of constitutional importance have been raised by them and they needed to be dealt with by a constitution bench.

On August 25, the court had not undertaken the hearing due to paucity of time as Justice Arun Mishra, who was heading the bench, was demitting office on September 2.

The court had not agreed to Dhavan’s submissions that it should seek assistance of the Attorney General in dealing with the issues raised and said that “it is best left to the appropriate Bench" which will be set up by the Chief Justice of India.

Dhavan had said that questions raised by Bhushan included the issue whether bona fide opinions of corruption also constitute contempt of court and "whether it is enough to show bona fide of opinion or it is necessary for the person to prove the allegation of corruption.

They also included whether a complainant is barred from discussing in public domain the contents of his complaint if an in-house inquiry is started, among others, he had said.

On August 17, the top court had framed certain questions and asked the parties to address it on three issues-- whether such statements about corruption against judges or judiciary can be made, in what circumstances they can be made and what is the procedure to be adopted with respect to sitting and retired judges.

Bhushan had also filed 10 questions on his own and sought adjudication by a constitution bench.

"Whether the expression of a bona fide opinion about the extent of corruption in any section of the judiciary would amount to contempt of court," Bhushan's plea had said.

"If the answer to the question is in the affirmative, whether the person who expresses such an opinion about the extent of corruption in a section of judiciary is obliged to prove that his opinion is correct or whether it is enough to show that he bona fide held that opinion," the second question read.

He had also given eight other questions related to freedom of speech and expression and the width and scope of contempt powers.