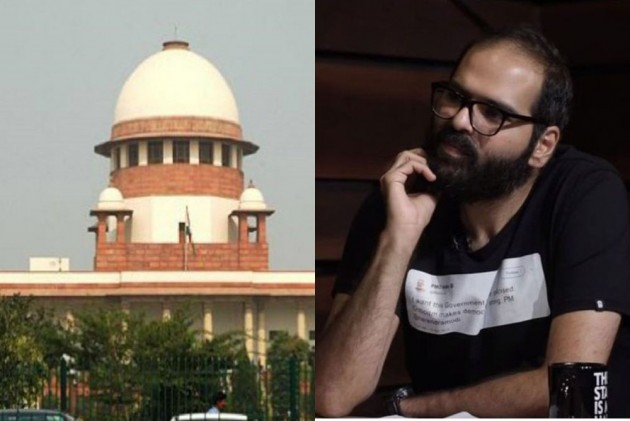 The Supreme Court will pronounce its order on Friday on a batch of petitions seeking initiation of criminal contempt proceedings against stand-up comic artist Kunal Kamra for his alleged scandalous tweets against the apex court.

The pleas came up for hearing on Thursday before a bench headed by Justice Ashok Bhushan which heard the submissions of advocate Nishant R Katneshwarkar, who appeared for one of the petitioners, and claimed that Kamra had posted several tweets scandalous to the judiciary.

"All these tweets are scandalous and we had sought consent from the attorney general," Katneshwarkar told the bench, which also comprised justices R S Reddy and M R Shah.

'I Don’t Intend To Retract My Tweets Or Apologise,' says Kunal Kamra On Contempt Charge

He read out the letter of Attorney General K K Venugopal, who had granted consent for initiation of criminal contempt proceedings against Kamra.

The bench asked the lawyer not to read the alleged contemptuous tweets of the comic artist in the court, saying they have already gone through Venugopal's letter on the issue.

The consent of either the attorney general or the solicitor general is necessary under section 15 of the Contempt of Courts Act, 1971 for initiating contempt proceedings against a person.

The attorney general had granted consent for initiation of criminal contempt proceedings against Kamra, saying the tweets are in “bad taste” and it is time that people understand that attacking the apex court brazenly will attract punishment under the Contempt of Courts Act, 1972.

One of the petitions has been filed by law student Shrirang Katneshwarkar and others, who have claimed that Kamra had started publishing tweets on November 11, when the top court was hearing the appeal of journalist Arnab Goswami against the Bombay High Court's order rejecting his plea seeking interim bail in a 2018 abetment to suicide case.

The plea has alleged that after the top court granted interim bail to Goswami on November 11, Kamra “again published various tweets and thereby scandalized” the apex court and “further lowered” its authority.

It has alleged that when some persons tried to make Kamra aware about the contempt of court, he was “rude, arrogant and unapologetic” and his conduct shows that he has “no regard” for the top court.

The plea has alleged that his tweets are in “such bad taste” that an ordinarily prudent man can gather that he has scandalised the apex court.

“The citizens of India have the highest regard to the courts of law. No law-abiding citizen of this country would tolerate such act of publication of tweets by the alleged contemnor (Kamra),” it said.

Venugopal had granted consent for initiation of criminal contempt proceedings against Kamra for his tweets and said that today people believe that they can “boldly and brazenly condemn” the Supreme Court of India and its judges by exercising their freedom of speech, but under the Constitution, the freedom of speech is subject to the law of contempt.

“I have gone through each one of the tweets which you have annexed for consent to proceed by way of criminal contempt against Kunal Kamra. The tweets which I am extracting below are not only in bad taste but clearly cross the line between humour and contempt of the court,” the attorney general had said in his letter to one of the applicants who had sought his consent for initiation of contempt proceedings against Kamra.