According to the Supreme Court website, the verdict would be pronounced at 10.30 AM by a bench of Justices R F Nariman and B R Gavai. 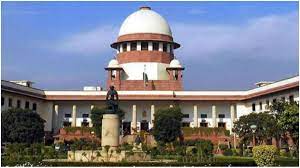 Verdict on e-commerce giant Amazon's pleas against the merger involving Future Retail Ltd (FRL) with Reliance Retail is scheduled to be pronounced by the Supreme Court on Friday.

The apex court is also is likely to decide whether the Singapore's Emergency Arbitrator (EA) award, restraining the Rs 24,731 crore deal, is enforcable under Indian law.

According to the Supreme Court website, the verdict would be pronounced at 10.30 AM by a bench of Justices R F Nariman and B R Gavai which had reserved it on July 29 after hearing battery of lawyers including senior advocates Harish Salve and Gopal Subramanium, appearing for FRL and Amazon respectively.

The verdict is keenly awaited as it is likely to deal with the legality and enforceability of an award by an Emergency Arbitrator (EA) of the foreign country here in view of the fact that the term EA is not used in the Indian Arbitration and Conciliation Act.

Amazon.com NV Investment Holdings LLC and FRL are embroiled in a bitter legal fight over the deal and the US-based firm has sought in the apex court that the EA award was valid and enforceable.

“We will decide whether EA award falls under section 17 (1) (which deals with interim award by arbitral tribunal) of the Arbitration and Conciliation Act. And if yes, then whether it can be enforced under section 17 (2) (of the Act),” the bench had said.

Section 17 (2) provides that the arbitral tribunal may require a party to provide appropriate security in connection with an interim measure ordered.

The top court, which had earlier asked the National Company Law Tribunal (NCLT) not to pass the final order related to regulatory approvals for the FRL-RRL amalgamation, commenced hearing the final arguments on July 20.

Salve, appearing for FRL, had referred to judgements on validity and the enforceability of arbitral awards and said that there was no notion of EA under the Indian law on arbitration and conciliation and, in any case, there was no arbitration agreement to this effect.

There was no provision for EA under the Indian Law and “it cannot be done by the process of construction”, Salve had said referring to the single-judge order of the Delhi High Court which had held the award of the EA to be valid.

Amazon had told the bench that the Biyanis of Future Group had negotiated with it to enter into certain agreements and is bound by the EA award restraining FRL from going ahead with Reliance Retail merger.

Subramanium in his submissions had reiterated that the EA's award in favour of Amazon was valid and enforceable under the Arbitration and Conciliation Act of India.

“For the purposes of this Act, the arbitral tribunal does not only imply a three-member tribunal, an EA would also be included. And merely because the word 'emergency' is not there (in the Act), does he cease to be an arbitrator under the Act,” he had said, adding that the court here has to enforce the award as per the provisions of the law.

Salve, in his rejoinder submissions, had said FRL has been saying that the EA had no jurisdiction to pass any award and the Delhi High Court cannot make it enforceable by constructing the Indian law.

Kishore Biyani and 15 others including FRL and Future Coupon Pvt Ltd (FCPL) have been made parties by Amazon in a batch of pleas challenging the Delhi High Court order of the division bench which paved the way for the deal.

On February 8, the division bench had stayed the single-judge direction to FRL and various statutory authorities to maintain the status quo on the mega deal.

The interim direction was passed on FRL's appeal challenging the February 2 order of the single judge which had ruled in favour of the US firm saying that the EA's award was valid and enforceable.

Amazon had first filed a plea before the high court (single judge) for enforcement of the October 25, 2020, EA award by Singapore International Arbitration Centre (SIAC) restraining FRL from going ahead with the deal with Reliance Retail.

FRL, in its appeal, had claimed that if the February 2 order was not stayed it “would be an absolute disaster” for it as the proceedings before the NCLT for approving the amalgamation scheme have been put on hold.

It had contended that the single judge's status quo order will effectively derail the entire scheme which has been approved by statutory authorities in accordance with the law.

In August last year, the Future group had reached an agreement to sell its retail, wholesale, logistics, and warehousing units to Reliance.

Subsequently, Amazon took FRL into EA before the SIAC over alleged breach of contract by the Future group.