Sachin Sawant claimed the ruling BJP-Shiv Sena came to power on the back of votes of "Marathi people", but it was these very people who were getting killed in such accidents. 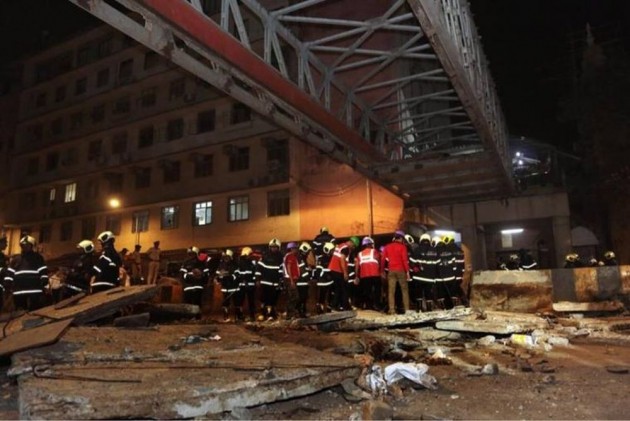 The NCP on Friday demanded that the multi-billion dollar Mumbai-Ahmedabad bullet train project be scrapped, a day after a foot overbridge connected to iconic CSMT station collapsed here, killing six persons and injuring 31.

Nationalist Congress Party MLA Jitendra Awhad said the money being spent on the high-speed rail project, a joint venture between India and Japan, should be invested to upgrade suburban railway facilities in the metropolis and surrounding areas.

He said scrapping the bullet train project would be part of the NCP's manifesto and claimed it would be called off within one month of the party attaining power.

"The prime concern of the government should be improvement of railway facilities. A blame game by authorities is not the solution. We demand that the bullet train project be cancelled since it is merely a show-off project and a waste of tax-payers' money," he claimed.

"We will also include this point in our manifesto. Within one month of coming to power, we will scrap the bullet train project and use the money for suburban rail and its connecting services," Awhad added.

"Specialised audit and immediate maintenance is required of dilapidated bridges, several 50-70 years old, over railway tracks in Mumbai and suburban areas," he said against the backdrop of Thursday's bridge collapse.

He claimed over 200 railway-related accidents occur daily which either cause loss of lives or injuries to commuters.

Maharashtra Congress spokesperson Sachin Sawant said an audit of the bridge, done a year ago, had recommended minor repairs but money for it was never sanctioned.

"This is a BMC-made disaster. Seeing the debris, the corrosion was clearly visible. The BMC is responsible for the loss of lives in this bridge collapse. Due to the corrupt practices of BJP and Shiv Sena, Mumbai has become a city of accidents," Sawant alleged.

He claimed the ruling BJP-Shiv Sena came to power on the back of votes of "Marathi people", but it was these very people who were getting killed in such accidents.