JD(S) has already expressed its desire to contest 12 seats, over which the Congress has some reservations, as it has maintained that seat sharing would be based on 'merit'. 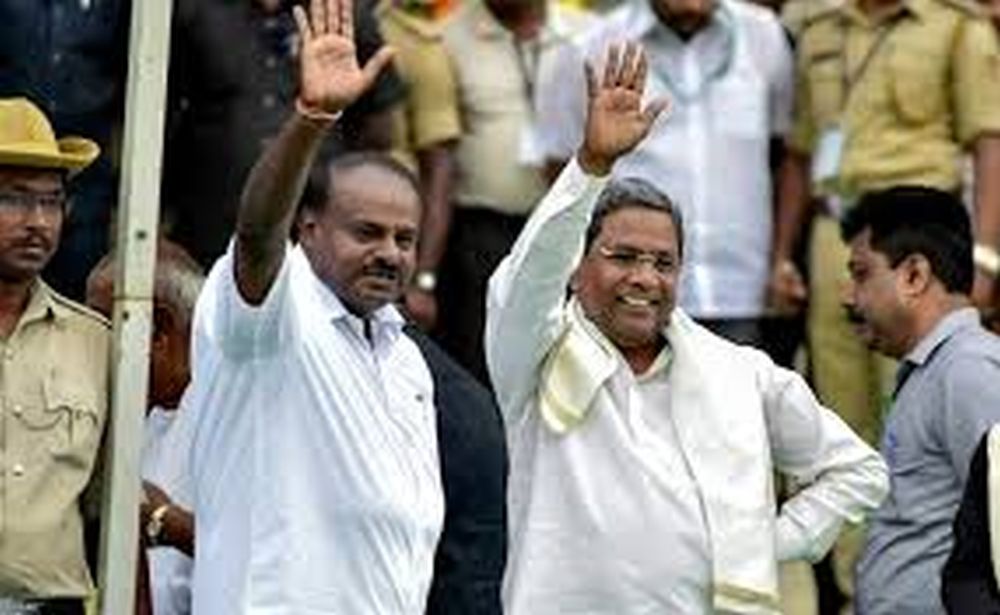 The contentious issue of seat sharing for the coming Lok Sabha polls between the ruling Congress-JD(S) in Karnataka is likely to be discussed in the first week of February.
An indication to this effect was given by state Congress President Dinesh Gundu Rao on Tuesday.

"Dates are getting fixed (to discuss seat sharing), we are in the process of confirming....we are discussing with everyone (leaders) for their availability...mostly in February first week a date will be fixed," he told reporters.

Rao said the four MLAs who did not attend the recent Congress Legislature Party meeting would be summoned to appear in person to give an explanation about their absence.

He warned party workers against crossing the 'Lakshman rekha' as he asked asked them to remain withing the framework of the coalition and not make any public statements against the government.

Coalition coordination committee chairman Siddaramaiah had said on January 24 that preliminary discussions on seat sharing have been held and a meeting would be held in three or four days to decide on the constituencies.

JD(S) has already expressed its desire to contest 12 seats, over which the Congress has some reservations, as it has maintained that seat sharing would be based on 'merit'.

Seat sharing is expected to be a litmus test for both parties, mostly in the old Mysuru region constituencies, where JD(S) has emerged as a dominant force in the recent past and Congress has nine sitting MPs.

Several senior Congress leaders and MPs, including Veerappa Moily, have reportedly asked the leadership not to cede nine seats where the party has its sitting MPs, to JD(S).

Referring to the four MLAs who skipped the CLP meeting, he said another notice would be issued to them to appear in person and give an explanation.

"Now they will have to come...they have not yet come to us, they have only written letters.
So another notice will be issued...they will be asked to present themselves before the CLP and explain their absence.

"I'm hoping that they turn up physically and give their reasons on why they were not able to attend CLP and other meetings, and discuss with us," he said.

The four MLAs, Ramesh Jarkiholi, B Nagendra, Umesh Jadhav and Mahesh Kumatahalli had skipped the CLP meeting on January 18 that was called as a show of strength in a counter to an alleged bid by the BJP to topple the coalition government.

They were allegedly camping at a hotel in Mumbai with BJP leaders, planning to jump ship to the saffron party.

Following this, notices were issued to the MLAs, seeking an explanation for their absence and why action should not be taken against them under the Anti-Defection law.

Three of the MLAs, Ramesh Jarkiholi, B Nagendra and Mahesh Kumatahalli responded to the notice, while Umesh Jadhav is yet to respond.

On the alleged brawl between Congress MLAs J N Ganesh and Anand Singh at a resort here, Rao said Congress would act on the report submitted by a committee it constituted for the purpose, headed by Deputy Chief Minister G Parameshwara.

"They (Committee) have had a preliminary meeting and I think they will be taking it forward and come out with a report. Based on that, we will definitely act.

The party has no intention of protecting anybody or to try to keep anything under wraps. We will take action and whoever has done wrong will have to face action," he said.

Police are on the lookout for Ganesh, who is allegedly absconding and is facing a case of attempt to murder for allegedly assaulting Anand Singh at a resort where Congress had herded its MLAs, fearing poaching by the BJP.

Following the incident, a red faced Congress had suspended Ganesh from the party.
The KPCC chief also said there was no 'argument' over the fact that the coalition governments Chief Minister was Kumaraswamy.

Amid strains in Congress-JDS ties, Chief Minister H D Kumaraswamy had on Monday threatened to step down over adverse comments by a Congress MLA, prompting the coalition partner to swing into damage control mode.

Rao also welcomed Congress President Rahul Gandhis announcement of "minimum income guarantee" for every poor person if the party comes to power at the Centre, and called it 'revolutionary'.