Speaking at the launch of the Kindle version of Swami Chidbhavananda's 'Bhagavad Gita', Prime Minister Modi said the epic's core message to people is to perform action. 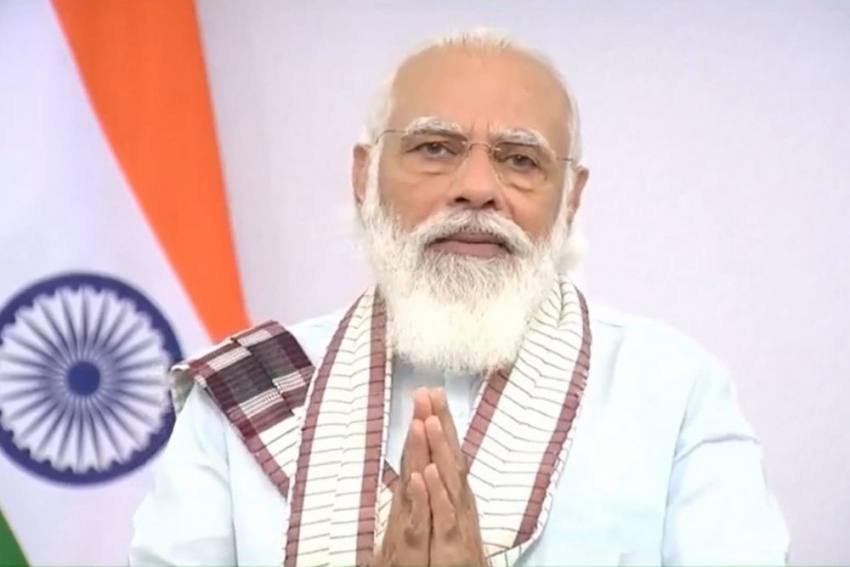 Prime Minister Narendra Modi on Thursday said that creating wealth and value "not only for ourselves but for the larger humanity" is at the core of 'Aatmanirbhar Bharat'. He also asserted that a self-reliant India is good for the world.

Speaking at the launch of the Kindle version of Swami Chidbhavananda's 'Bhagavad Gita' via video conferencing, the prime minister said the epic's core message to people is to perform action and asserted that 1.3 billion people of India have decided their course of action which is to make India 'Aatmanirbhar' or self-reliant.

In the long term, a self-reliant India is in everyone's interest, he said.

In the recent past, when the world needed medicines, India did whatever it could to provide them, the prime minister said, referring to India providing medicines and now vaccines during the COVID-19 pandemic.

"Our scientists worked in a quick time to come out with vaccines. Now, India is humbled that vaccines made in India are going around the world. We want to heal as well as help humanity. This is exactly what the Bhagavad Gita teaches us," Modi stressed.

He said the Bhagavad Gita was born during conflict, a reference to Mahabharat, and many feel that humanity is passing through similar conflict and challenges now, Modi said.

"The world is fighting a tough battle against a once-in-a-lifetime global pandemic. The economic and social impacts are also far reaching. In such a time, the path shown in Bhagavad Gita becomes ever relevant," he asserted.

It could provide strength and direction to once again emerge victorious from the challenges humanity faces, he said

"In India, we saw many instances of this. Our people-powered fight against COVID-19, the outstanding spirit of the people, the courage of citizens, one can say that behind this is a glimpse of what the Gita highlights," he said.

Noting that E-books are becoming very popular specially among the youth, Modi said, therefore, this effort will connect more youngsters with the noble thoughts of the Gita.

The beauty of the Gita is in its depth, diversity and flexibility, he said.

He quoted a peer reviewed journal of cardiology published by the University of Oxford which talks at length about the relevance of Gita during the time of the COVID-19 pandemic.

Modi said this e-book will also deepen the connect between the eternal Gita and the glorious Tamil culture and enable the Tamil diaspora spread across the world to read it easily.

He praised the Tamil diaspora for scaling new heights in many sectors and yet carrying the greatness of its culture wherever they went.

Paying homage to Swami Chidbhavananda, the prime minister said the mind, body, heart and soul of the Swami was devoted to India's regeneration.

He said the beauty of the Gita is in its depth, diversity and flexibility.

Modi asked youngsters to read Gita, saying its teachings are extremely practical and relatable. In the middle of their fast-paced lives, Gita will provide an oasis of clam and peace, he added.