The incident comes amid protests by farmers and opposition parties across the country over the contentious farm legislations that were passed by Parliament last week. 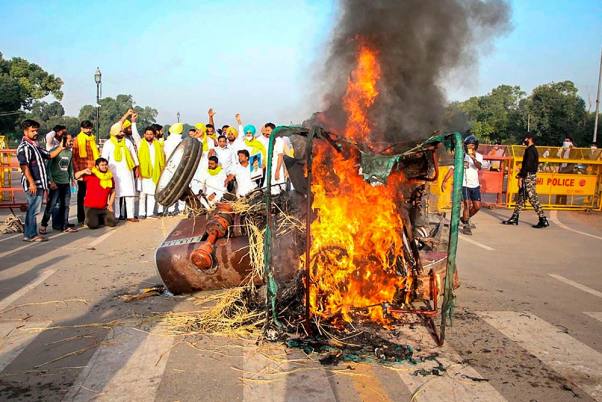 The BJP on Monday blasted the Congress over the burning of a tractor near the India Gate here, allegedly by opposition party workers, saying it has "shamed" the country with its "drama" aimed at publicity and "misleading" farmers.

Union minister Prakash Javadekar said the way the protest was held by bringing a tractor in a truck and then setting it afire is condemnable.

"The Congress shamed the country today. Bringing tractor in a truck and then burning it at India Gate is a drama enacted by the Congress and we condemn it. The party has been trying to do politics in the name of farmers, and it has been unmasked. It has enacted a drama for publicity," he told reporters about the incident.

Around 15-20 people set a tractor on fire at India Gate on Monday morning, police said.

Five people claiming to be members of the Punjab Youth Congress have been detained, they said.

The incident comes amid protests by farmers and opposition parties across the country over the contentious farm legislations that were passed by Parliament last week.

Accusing the opposition party of misleading farmers, Javadekar said its manifesto had promised doing what the Modi government has done with its farm sector reform bills, and added that former prime minister Manmohan Singh had also spoken similarly on the issue.

"Now the Congress is trying to mislead farmers by speaking in a different voice. But it will not succeed," he said, noting that the minimum support price and APMC mechanism is continuing.

The Congress and several other opposition parties have been protesting against three farm sector laws enacted by the Modi government, alleging these are "anti-farmer measures" and will "destroy" the agriculture sector.

The government has, however, asserted that the new laws will free farmers from the clutches of middleman and allow them to sell their produce anywhere they want at a remunerative price.