Nothing On Alliance With AAP Yet: Sheila Dikshit Cites Rajiv Gandhi

However, the celebrations were marred as controversy erupted over the presence of Jagdish Tytler, an accused in the 1984 anti-Sikh riots, at the event. 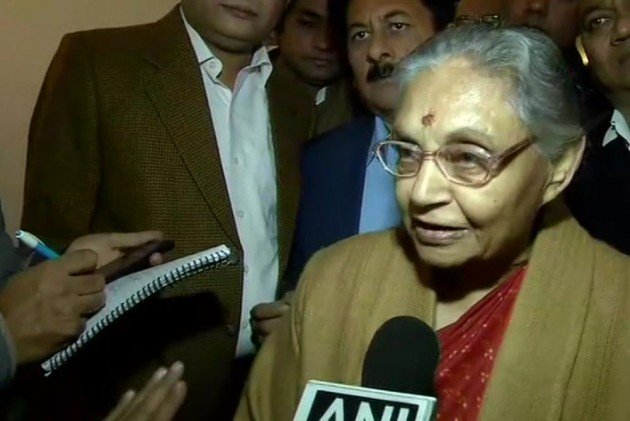 After taking charge as the new Delhi Pradesh Congress Committee chief, Sheila Dikshit made clear on Wednesday that there is nothing on alliance with AAP yet.  BJP and AAP both are an equal challenge to the Congress party which will meet the challenges together.

She said politics is full of challenges, and they will strategise accordingly.

Responding to questions on a possible tie up with AAP in the national capital, the three time chief minister said: "The way they talked about Rajiv Gandhi in the assembly... we were hurt by it and it was not right. There have been no talks with AAP."

Dikshit took charge as the party's Delhi chief in presence of a large gathering of workers and senior leaders in Delhi's Rajiv Bhawan, the office of the state Congress.

However, the celebrations were marred as controversy erupted over the presence of Jagdish Tytler, an accused in the 1984 anti-Sikh riots, at the event.

The enthused workers greeted the former Delhi chief minister as she reached the office at DDU Marg with slogans and drum beats. Chants like "Sheila Dikshit Ayi Hai, Badlaw Ki Andhi Layi Hai" "(Sheila Dikshit has come with a storm of change) were heard.

With Dikshit at the helm of affairs, the party is looking to revive its fortunes in the national capital after a series of poll debacles starting with losing of power in 2013.

Dikshit said she will take the party to new heights in Delhi where it will replace all and sought help of ground-level workers. She also said the Congress will make full efforts to win all the seven Lok Sabha seats in Delhi.

Dikshit, 80, was appointed to the post by the party's national president Rahul Gandhi after Ajay Maken stepped down citing health troubles.