Earlier, Congress workers jostled to have a glimpse of their leader as the body was brought in a glass casket from her Nizaumuddin residence to the party headquarters. 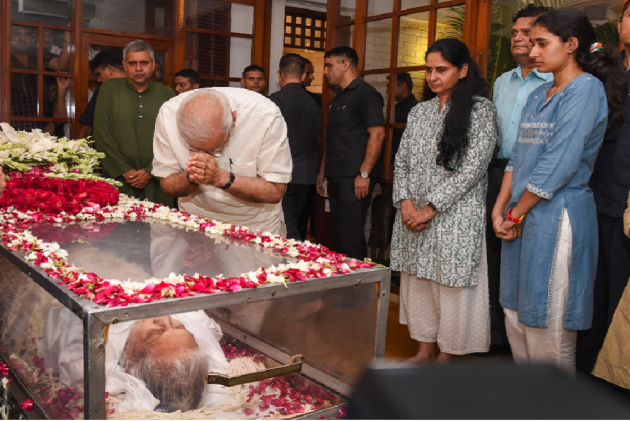 The mortal remains of former Delhi chief minister and senior Congress leader Sheila Dikshit were cremated at the Nigambodh Ghat in the national capital on Sunday. She was accorded state funeral.

The three-time chief minister and senior Congress leader, who gave Delhi its modern look, passed away Saturday afternoon at a private hospital here after suffering a cardiac arrest.

Hundreds of men and women and politicians from across the political spectrum paid their respects to the veteran leader, who announced her arrival on the political scene first in 1984 when she successfully contested from Uttar Pradesh's Kannauj.

Earlier, Congress workers jostled to have a glimpse of their leader as the remains were brought in a glass casket from her Nizaumuddin residence to the party headquarters.

Most of the people had some encounter with Dikshit during her 15 years stint as the chief minister of the national capital.

The Delhi government has announced two-day mourning and a state funeral for Dikshit.