The Indigenous Aircraft Carrier (IAC) Vikrant had sailed out for the second sea trials on October 24. The maiden sea sortie of the ship was successfully undertaken on August 21 this year. 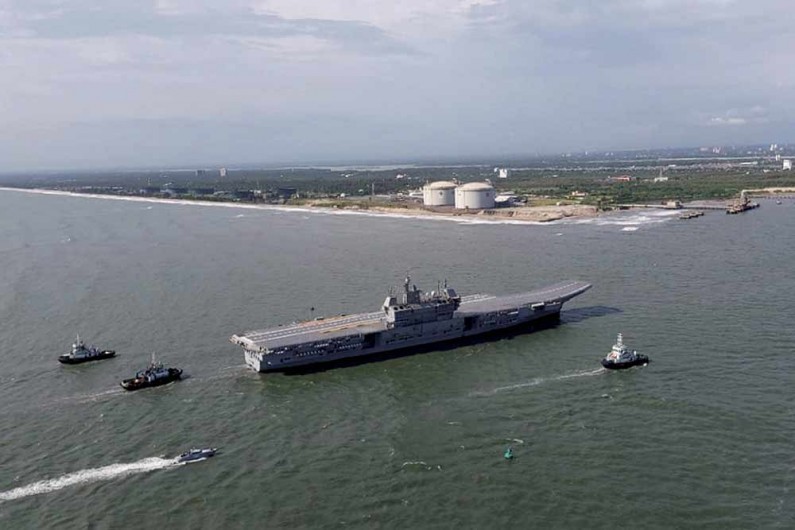 Union minister of Ports, Shipping and Waterways, Sarbananda Sonowal on Sunday said the government aims to commission the Indigenous Aircraft Carrier (IAC) Vikrant by August 2022.
The minister reviewed the progress of the sea trials of IAC Vikrant.

The ship had sailed out for the second sea trials on October 24.

Chief of Naval Staff (CNS) ,Admiral Karambir Singh accompanied the minister during his onboard visit, along with other Naval officials.

Sonowal and the Navy chief addressed a gathering of the Cochin Shipyard Limited (CSL) staff, Naval personnel and other officials on board Vikrant which has been undertaking sea trials off Kochi coast.

"This is the second trial. Our aim is to commission the ship by August next year. I am extremely happy to embark the first IAC Vikrant built in collaboration between the Cochin Shipyard Limited and the Navy," Sonowal said.

The maiden sea sortie of the ship was successfully undertaken on August 21 this year.
Sonowal impressed upon CSL to ensure timely delivery of the ship in April 2022 to realise the commissioning by August the same year to commemorate ‘Azadi ka Amrit Mahotsav’.

The IAC designed by Indian Navy's Directorate of Naval Design (DND) is being built at CSL, a Public Sector Shipyard under the Ministry of Ports, Shipping and Waterways (MoPS&W).
During this second sea trial, detailed trials and testing of propulsion machinery, electrical and electronics suites, deck machinery, lifesaving appliances and ship systems are being progressed.

With the delivery of IAC, India would join a select group of nations with the capability to indigenously design and build an Aircraft Carrier.