Shit Happens. Let’s Talk About It

An uncomfortable yet necessary look at why our waste matters 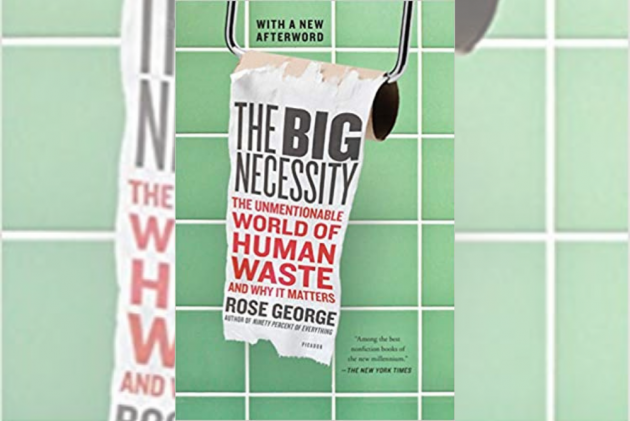 The Big Necessity: The Unmentionable World of Human Waste and Why It Matters by Rosa George

The opening chapter of the book familiarizes the readers with an incident when the author was travelling in Ivory Coast and had the sudden urge to use the bathroom. A Liberian refugee escorted her to a room that was made of tiled floor and had no toilet, no hole. In response to her growing confusion, she was asked to “do it on the floor. What do you expect? This isn’t America!” This became the motivation for the title of this book. When 2.6 billion or four in ten people in the world lack access to toilets, sanitation becomes a privilege.

The author is provocative in her writing. She incites the privileged class to think about “shit” and where it ends up. The book draws its research on uncomfortable facts: 90 per cent of the world’s sewage is released untreated in water bodies, and surreptitiously finds its way back to our drinking water. This occurs despite modern technology and ingenious engineers. The author traces the root of stagnant progress of sanitation in biology – humans are disgusted by faeces. We don’t want to touch, feel, smell and even think about them once they are flushed. And this is when the author takes us on the journey in the sewers of New York and London, forcing us to confront our “flushed shit”.

She enters a sewer in London with an experienced worker who had lost his sense of smell and was unduly concerned about her safety (mostly because of the paperwork that it would entail). Knee-deep in the sludge, the author realised that surprisingly, the sewers did not smell as bad and this is because the sewers are 98per cent water or “diluted poo”. The chapter shocks its readers with all the material flushed and found in the sewers (imagine a motorbike handle and a hand grenade). In New York, she found a team with a cheerier disposition but the anecdotes were just as dark and entertaining (words like “swimming in sewage”, “roaches on steroids”, etc. were thrown around casually). Aside from imparting an important lesson (the indifference towards the centuries’ old sewage system), the author succeeds at making us think about our poo, even when it is flushed out from our site. It is uncomfortable and yet necessary.

One of the most inspiring draws of the book is the development of the sanitation industry in Japan. Much like the present developing world, the pre-toilet revolution Japanese did not know that they wanted better toilets. And now, Japan is host to the world’s most remarkable toilets: it warms up the seat, checks the blood pressure, plays the music of choice, cleans and dries the anus, and puts the seat down. The journey of the Japanese from owning pit latrines, being squatters and using sticks and stones to clean anus, a mere sixty years ago, to the world’s leader in toilet technology is an inspirational one. The success can be single-handedly attributed to the sassy Japanese advertising industry. For example, catchphrases like “even bottoms have feelings”, and “even though it’s a bottom, it wants to be washed too” left a strong imprint on the viewers. Toilets became more than just a means of defecation; it was advertised as a desirable lifestyle as toilets in cramped apartments can turn the limited space and time of an individual into a pleasant experience. This marketing strategy ties in with a quote mentioned later in the book “focus on wants and not on needs”.

Any sanitation journey is incomplete without discussing India – a country that is the residence of the greatest number of people practising open defecation in the world i.e. using open fields or bushes instead of toilets for defecation. The readers are introduced to a typical manual scavenger in India, i.e., people who pick up excrement with their bare hands or tin foil, shove it in the basket which they carry over their head and drop it in the nearby dump. The book traces the puzzling existence of this illegal and inhumane practice in the caste system in India. With another Indian activist, we transcend to the solution of the enduring pervasive issue of manual scavengers in India: alternative employment. Dr Bindeshwar Pathak inaugurated Sulabh International that built around half a million public toilets. This endeavour was laudable, especially for its time, since rural sanitation coverage (fraction of households with toilets) in India was zero. The public toilets are named Sulabh Shauchalayas (translated as easy latrines) and were the first-of-its-kind twin-pit pour flush technology. While the book details the engineering marvel, I revert your attention to manual scavengers. The organisation actively hires them as cleaners, a more dignified source of employment and importantly, frees them from the societal obligation of being unemployable besides scavenging. The writer was engaging in her narrative and shed light on an aspect of India’s sanitation that is worthy of being included as a proud chapter in school textbooks.

At the opposite end of India is China, a country that has embraced faeces. The book hilariously identifies them as fecalphiliac. With the author, we take the arduous journey in Chinese history to perfect the biogas digesters that have used excrement and benefitted the rural population. In South Africa, we are introduced to Mulauzdi, a geologist who proudly calls himself Dr Shit. On one of his drives, he found a group of children lurking outside school and upon inquiring he found that the children were searching for a place to relieve themselves. Puzzled, he decided to explore the sanitary conditions of the school. His descriptions will leave a burning visual that will be hard to get rid of (and yes, I will spare you these details!). The state of sanitation shook him so much that he found a shovel and started cleaning toilets. And just as admiringly, the next day he quit his job and dedicated his life to this cause. Through all her stories, the author never ceases to amaze the readers by juxtaposing grim situations with brave and inspirational people who had the vision to bring sanitation to individuals and places that do not have it.

If such stories weren’t enough to get you curious enough, then the book is also brimming with strange facts like the spray from the stream of urine has the potential to change the colour of your wallpaper over the years (cue to encourage men to sit down and pee!), streets filled with faeces in the 17th century were the main motive behind the invention of heels, how the isolation of the stinkiest element of faeces led to the invention of faecal stink bombs, and how the Vietnamese army laid out thousands of wooden sticks topped with excrement in the battleground.

The author’s writing style is gripping as the readers are transported to different countries and become a part of their unique sanitation journey. In line with the discomforting confrontation of facts, the book also discusses the consequences of inadequate sanitation by asking us to imagine two jumbo jets filled with children. Now, imagine releasing these children mid-air. Diseases from inadequate sanitation kill these many children every four hours. Sanitation has never been so fascinating and for that, besides clever research, I also credit the author’s razor-sharp wit and a tenaciously dark sense of humour.

(Payal Seth is a consultant at Tata-Cornell Insitute and a PhD Scholar at Bennett University.)