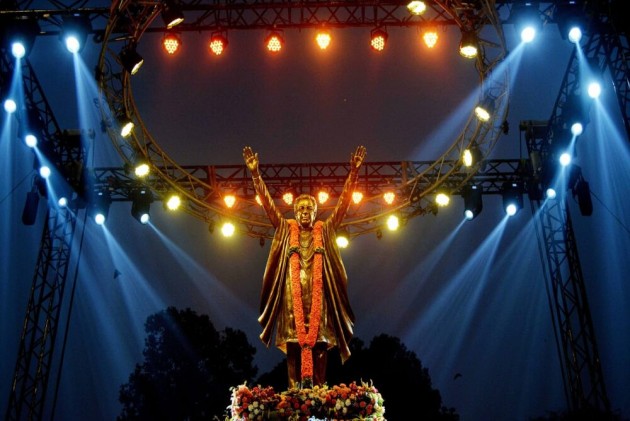 A statue of Shiv Sena founder Bal Thackeray was unveiled in Colaba, Mumbai, on the occasion of his 95th birth anniversary on Saturday. Thackeray's statue is located at the busy roundabout between Chhatrapati Shivaji Maharaj Vastu Sangrahalaya and National Gallery of Modern Art in south Mumbai.

"It is an unforgettable moment in my life like it is for every Shiv Sainik. There are some moments where you fall short of words to express your gratitude, and I think today is that day. Balasaheb remained cordial with all political parties at the personal level," the CM said.

Uddhav Thackeray further said he was thankful to leaders of various political parties who put aside their political affiliations and attended the unveiling event.

"My grandfather Balasaheb Thackeray always respected personal relations with political leaders irrespective of their ideological differences. This is a very important moment for us as his statue has finally come up here in Mumbai," said Aaditya Thackeray, state minister.

On the occasion, the CM felicitated Shashikant Wadke, who sculpted the statue.

Deputy Chief Minister and NCP leader Ajit Pawar was absent at the function as he was in Pune.

The state government had earlier named the upcoming Nagpur-Mumbai super communication highway after Bal Thackeray. One of the hospitals run by the Mumbai civic body has also been named after the Sena patriarch.