The three parties say they have signatures of all their respective MLAs to prove majority in the House. 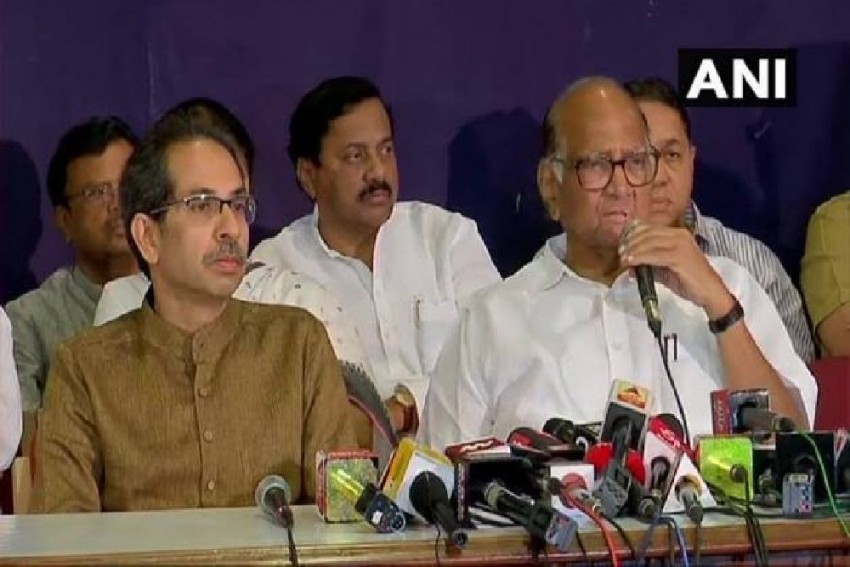 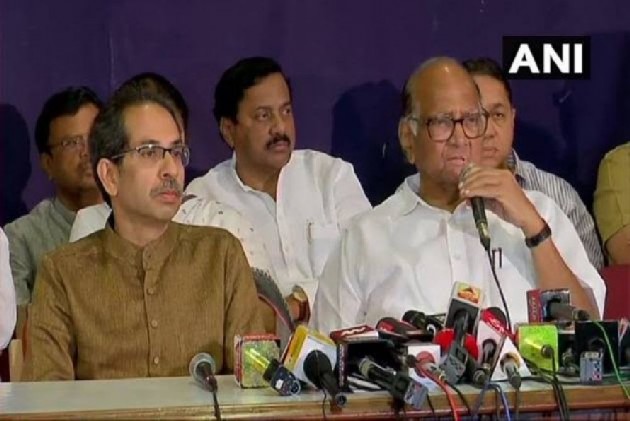 The Congress-NCP -Shiv Sena alliance has submitted letters of support to Governor B S Koshiyari at Raj Bhavan staking claim to form government in Maharashtra while saying that the present govt doesn't have the numbers.

NCP leader Jayant Patil said the Shiv Sena, NCP and Congress have signatures of 162 MLAs to prove majority in the House, which the combine will submit it to Supreme Court as well.

"Once Fadnavis fails to prove his majority during the floor test, the Shiv Sena's claim for government formation should be considered," the 'Maha Vikas Aghadi', the post-poll alliance formed by the three parties said in the letter.

"We have attached the list of NCP and Congress MLAs supporting Sena's claim along with other smaller parties and Independents who have extended their support. We should be called to form government immediately," they said.

"If the governor permits, we will bring all the 162 MLAs before him," Patil told reporters outside the Raj Bhavan where Shiv Sena and Congress leaders were present as well.

Patil said they have the signatures of "51 out of total 54 NCP MLAs".

"Ajit Pawar, Anna Bansode and Dharmaraobaba Atram have not signed the letter. Bansode is in Pune while Atram had gone to Gurugram along with other NCP MLAs but he informed us that he is with the party's decision," he said.

The three parties' MLAs arrived at Raj Bhavan by 10:30 am on Monday as the Supreme Court continued hearing the NCP-Congress-Shiv Sena plea challenging the formation of the state government by the BJP with help from NCP leader Ajit Pawar.

"The Supreme Court is the only institution where we still have some faith left," Sena leader Sanjay Raut said.

Raut alleged that the BJP acted like "dacoits of Chambal" to form government in the state "without having majority".

"The Shiv Sena, NCP and Congress will have at least 10 MLAs more than the BJP when the floor test will be done in the Assembly," the Rajya Sabha member said.

The government formation in Maharashtra has come under the Supreme Court's scrutiny with the Centre being asked to produce before the court on Monday morning the letters of the Governor inviting Devendra Fadnavis as well as the communication of the BJP leader staking his claim.

In a dramatic turn of events, Devendra Fadnavis and Ajit Pawar were sworn in as chief minister and deputy chief minister respectively by Governor Bhagat Singh Koshyari at 8 am on Saturday at a hush-hush ceremony in Raj Bhavan in Mumbai, leading to the lifting of the President's rule in the state.

The BJP was propped up by NCP's Ajit Pawar who revolted against his party headed by his uncle Sharad Pawar.

The BJP and the Sena, which fought the last month's Assembly polls in an alliance, secured a comfortable majority by winning 105 and 56 seats respectively.

The NCP and Congress won 54 and 44 seats respectively.